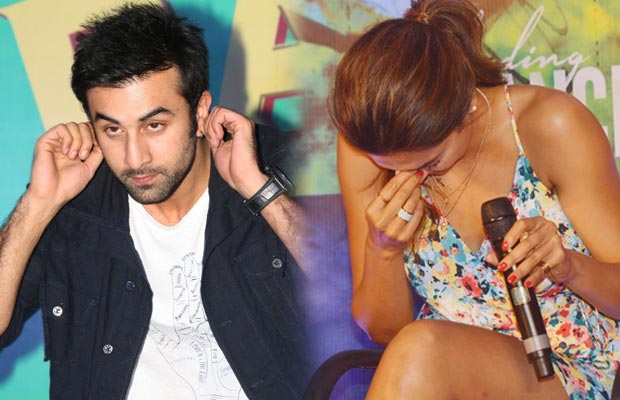 Bollywood actors Ranbir Kapoor and Deepika Padukone‘s love story is known to all and the duo are coming back together for their film ‘Tamasha’ after their break up. The duo was madly in love with each other but sadly they broke up and currently Ranbir Kapoor is dating Katrina Kaif while Deepika is allegedly in love with Ranveer Singh.

With their relationship being the talk of the town, the makers of ‘Tamasha’ released a love break up song. “Agar Tum Saath Ho” is a break up song with a high on emotion screenplay which made filming for the same tough for Ranbir Kapoor-Deepika Padukone. The third song from the much awaited film Tamasha, titled “Agar Tum Saath Ho” released online recently and has been gaining tremendous response ever since.

The song in question is a break up number which is played in a pivotal scene from the film. It was exceptionally challenging for the films lead pair, Ranbir-Deepika to deliver the high level of intensity demanded by the song.

Deepika Padukone is seen sobbing in the very beginning of the video, while Ranbir appears non responsive to her. The filming, which lasted for 3 days, left the duo mentally exhausted and low.

Its video which portrays a phase of heartbreak has generated relatability with the audiences as both Ranbir and Deepika have emoted wonderfully. Alka Yagnik provides the much needed depth to the screenplay with her soulful voice. A.R Rahman‘s vision combined with Imtiaz Ali‘s direction has taken the song to another level, making it an instant favourite amidst the audiences.

Tamasha being one of the most awaited films of the year showcases the most loved pair Ranbir Kapoor and Deepika Padukone, who were last seen together in 2013, coming together on the silver screen on the  27th of November.