Bollywood’s superstar Shah Rukh Khan who always gets nostalgic of something or the other, remembers his father Meer Taj Mohammed Khan on his 35th death anniversary.

Shah Rukh Khan who is tied up with the shooting of his much talked film ‘Dilwale‘ took to his twitter handle to share his feelings for his late father. He tweeted, “Yrs accumulate & our wounds turn into water, & reflect the unlikely glimmer of happiness in moments of remembrance.35 yrs since I saw my Dad.” 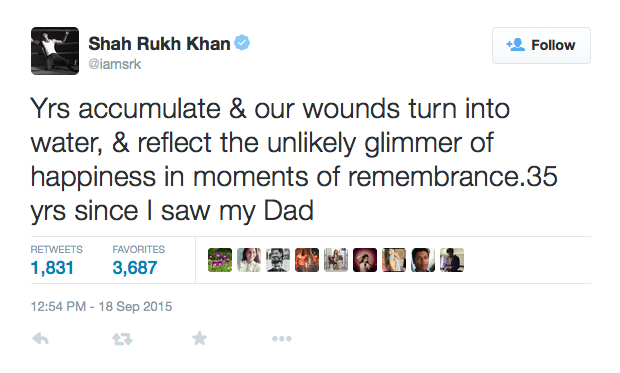 Little did anyone know that Shah Rukh Khan and his father shared a very good bonding with each other. Both father and son who were more like friends always called each other ‘Yaar’. King Khan’s father, Meer Taj Mohammed Khan, an ethnic Pashtun (Pathan), was an Indian independence activist from Peshawar, British India. 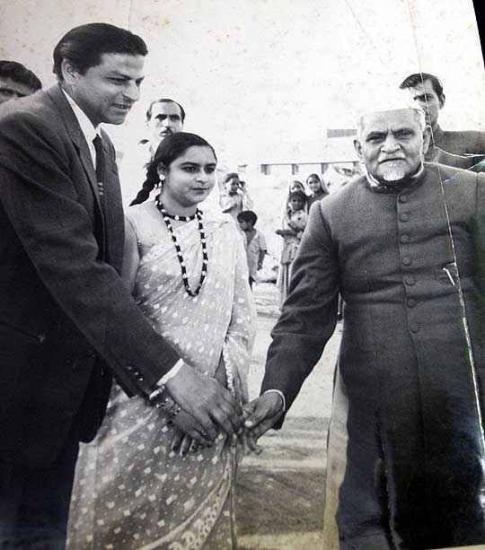 Well, Shah Rukh has always spoken fondly of his parents. He often mentions interviews and at events that he wishes they were alive today to see his achievements. True, isn’t it?

On the work front, SRK is shooting for the second schedule of ‘Dilwale’ with his co-star Kajol in Hyderabad. Also actors Varun Dhawan and Kriti Sanon have joined the team for the shooting of a song for the film.

The movie is directed by Rohit Shetty and will hit the screens on December 18 this year. The film is going to be a big movie of the year, as Shah Rukh Khan and Kajol will share screen space again after years. The actor will also woo his audience in his other two films, Rahul Dholakia’s ‘Raees’ and Maneesh Sharma’s ‘Fan’.