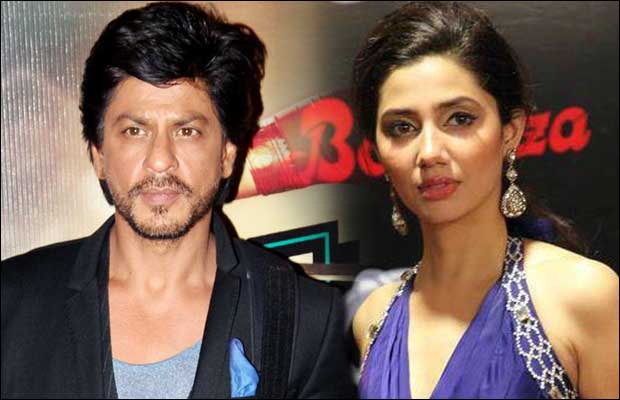 Bollywood’s King Khan, Shah Rukh Khan, who is currently very busy shooting for his upcoming film Dilwale, by director Rohit Shetty, will also be seen in Fan and Raees. One of the most awaited films of the year ‘Dilwale’, is right on schedule. The masses are already getting restless to see Kajol and SRK share screen space in the film ‘Dilwale‘. The two top actors, who are labeled as the most romantic on screen duo of B-Town, were paired together in ‘My Name Is Khan’, but this time the audience is expecting the magic of DDLJ to be recreated on screen.

Recently, SRK tweeted a picture of him with Kajol in which they both looked happy, hot and made for each other. The chemistry which we expect from the two was clearly visible in the photo. The Pakistani Actress Mahira Khan who will be seen opposite SRK in ‘Raees’ got may be a little insecure seeing their chemistry. She is a fan of SRK and follows his updates on twitter hence she tweeted ‘@iamsrk Uffff!You both, Uff!’ to which our superstar candidly replied ‘@TheMahiraKhan just saw your tweet. ‘Uff’ we will look good in Raees too. Hope all is well with you and family.’ 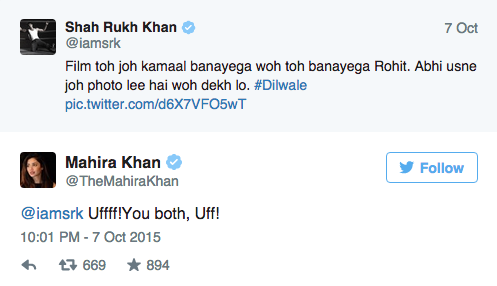 Well from the talks that we are seeing on Twitter, looks like the famous and most well paid actress of Pakistan is a little anxious to work opposite King Khan. She seems to be having a little girls crush on our star and hence it will be pleasant to see a new chemistry on screen.

Directed by Rahul Dholakia, Raees also stars Nawazuddin Siddiqui, Mahira Khan in the lead roles. ‘Raees’ is a crime-thriller based on the life of a Guajarati based Don Abdul Latif. Shah Rukh will be seen in the role of the cruel and clever bootlegger.