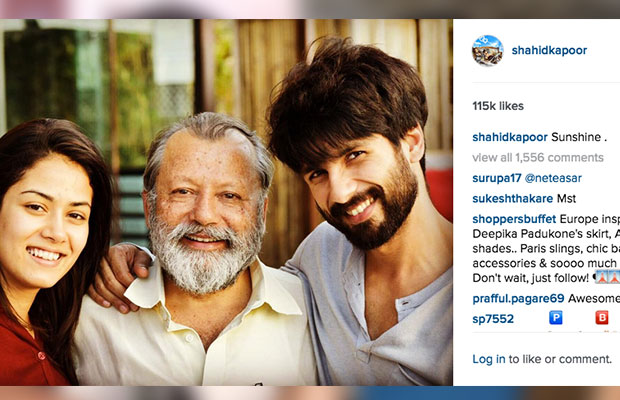 Family always comes first and means the most to all our B-town celebrities. Be it SRK or Big B, all stars that are working in our industry in search of name and fame know the importance of family. Even when they stay away from them, they adore them and yearn to spend some quality time with them. We were lucky enough to catch a glimpse of this happy family time of Shahid Kapoor when he was with his father Pankaj Kapoor and wife Mira Rajput.

Shahid Kapoor since his marriage to Mira Rajput has tried his best to keep their relationship and personal affairs away from media. He enjoys keeping his personal and professional life separate. Recently the star had a break from his hectic shoots which he decided to spend with his family. He posted a morning picture of his with his father and wife on the photo sharing networking site Instagram. Shahid Kapoor very candidly titles the photo as ‘Sunshine’, we just can’t guess why the name sunshine?

Shahid Kapoor is looking quite happy and relaxed wearing a simple white buttoned tee, he is still sporting the bearded look from his latest movie ’Shaandaar’ opposite Alia Bhatt. Mira Rajput is looking quite cheerful in a maroon tee, she is seen smiling joyfully looking at the camera. Pankaj Kapoor will be soon seen on-screen with Shahid in ‘Shaandaar’ as Alia Bhatt’s father. He seems to be enjoying the company of his son and daughter-in –law no wonder we see a natural happy smile on his face.

The much-loved trailer of Shahid Kapoor–Alia Bhatt starrer ‘Shaandaar’ has crossed 10 million views! The fresh pairing and the sizzling chemistry of Shahid Kapoor and Alia Bhatt has become the talk of the town ever since the trailer was released. Set against the backdrop of the ‘Shaandaar’ wedding; the film is an out-and-out youthful love story focusing on two characters Alia (played by Alia Bhatt) and Jagjinder Joginder (played by Shahid Kapoor). Alia’s father Bipin (played by Pankaj Kapoor) adds the twist to their romance as he believes there’s no guy that will be good enough for his daughter.