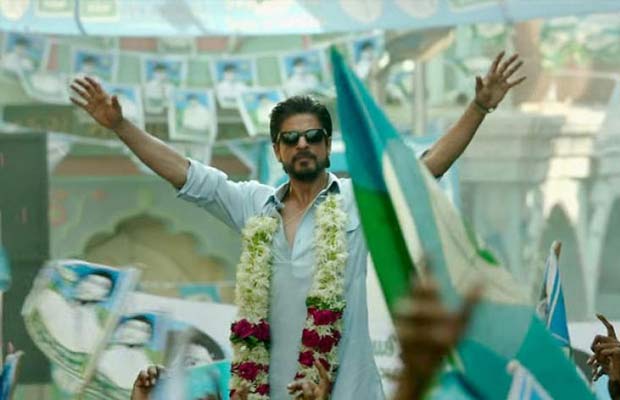 Shah Rukh Khan is one of the brilliant actors we have. Over the year, he has given us many iconic hits. With each of his films, we expect more from the actor. Well, fans have been patiently waiting for at least a glimpse of Raees’ trailer or at least a teaser. Look’s like we’re soon getting to see a trailer or at least another trailer of Raees.

Director Rahul Dholakia had announced a few days ago on Twitter that Raees’ trailer will take the time to come out. Well, his recent tweet has left us bewildered. The director tweeted, ‘Crush the blacks, increase the burns, add the goggle brights, punch in the warmth; setting the color of #raees before KUM disappears 2 shoot.‘

Crush the blacks, increase the burns, add the goggle brights, punch in the warmth; setting the color of #raees before KUM disappears 2 shoot

Does this hint towards the trailer of Raees? Or second teaser? Well, we have to wait a more to know what he exactly wants to say. The first teaser was out last year and looks chilling. SRK looks striking as Miyan bhai in the trailer. The trailer received huge positive responses. Raees was supposed to release this EID with Salman Khan’s Sultan. Sadly, King Khan postponed the release date in January 2017 to avoid the clash. Well, not the film will be clashing Hrithik Roshan’s Kaabil on January 26 next year. SRK has been trying his best to avoid its clash with Kaabil, but the makers of Hrithik’s film are not ready to change the date. Reportedly, SRK would be avoiding this clash too. Well, if at least a teaser or a new poster of the film comes out, it would be delighting to millions of his fans.

Raees is based on the story of bootlegger Raees Khan. The film also stars Pakistani actress Mahira Khan. Sunny Leone has also done a special item number with SRK in the film.