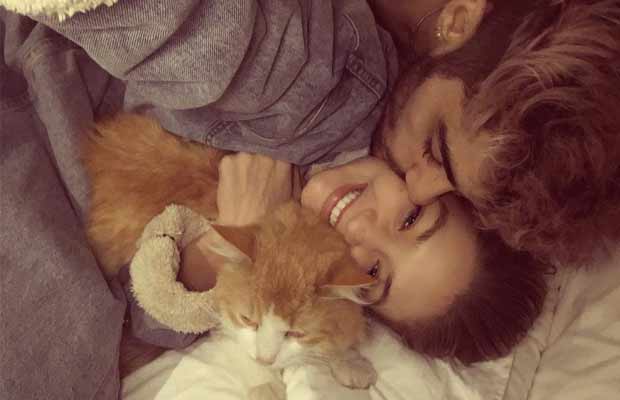 [tps_footer]Gigi Hadid revealed some sad news on Instagram yesterday. Her cat Chub, a regular on her social media pages, has passed away. Fortunately for Gigi, her boyfriend and former One Direction member Zayn Malik, is there for her during this trying time.

In her latest post, the supermodel posted a throwback picture with her cat and her boyfriend, captioning it –  “:( we love you always chub?…”

The picture shows Hadid, 20, cuddling with her boyfriend Zayn Malik, 23, and her ginger cat Chub (in memory of whom she posted this picture). Malik is kissing her smiling face and the two of them — plus Chub — seem perfectly content and happy to be together.
Gigi’s earlier Instagram posts show that her boyfriend Zayn is attached to Chub as well. A few weeks ago, the supermodel Instagrammed a photo of the ‘Pillowtalk’ star cradling the feline beauty. Seeing as Zayn Malik is so comfortable with his girlfriend’s pet, we can only imagine that he is consoling her on her loss right now.

The couple, who were first linked together in November 2015, officially confirmed their relationship in February this year, after Zayn released his steamy music video, Pillowtalk, featuring none other than Gigi Hadid.

We hope Hadid feels better with Zayn around. May Chub’s sould R.I.P.