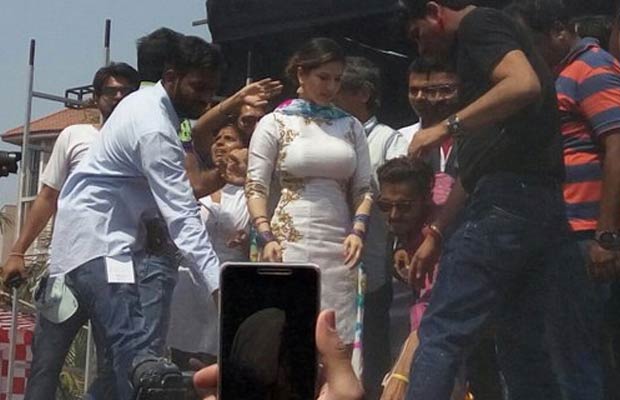 [tps_footer]Going by her off-screen persona, Bollywood actress Sunny Leone is a strong and bold woman in real life. Be it a negative or positive controversy, the actress has always spoken her mind out. Recently, at a Holi event in Surat, Sunny Leone slapped a reporter for asking her inappropriate question.

According to reports, Sunny Leone slapped a reporter after he asked how much does she charge for night performances. The Ragini MMS2 actress was in Surat with her husband Daniel Weber for a Holi event titled, ‘Play Holi with Sunny Leone’. Reportedly, post the incident, Sunny Leone agreed to perform and participate in the event only if there were no media.

The incident happened early in the morning when the actress arrived at a five-star hotel in Gujarat with her husband Daniel. In the corridor of her hotel room, a reporter asked a couple of questions to the actress and soon incident took an ugly turn after the reporter asked Leone, “You were a po*n star earlier, now you are a film star. So how much do you charge now?”

Sunny Leone’s husband Daniel reacted to the entire incident that happened before the Holi event. In his quote to mid-day, Daniel Webber said, “Sunny has given an apt reply to the reporter so we are not filing any police complaint. The organisers were also college kids so we do not want their careers to be damaged. But henceforth, Sunny will think a thousand times before coming to Gujarat.”[/tps_footer]