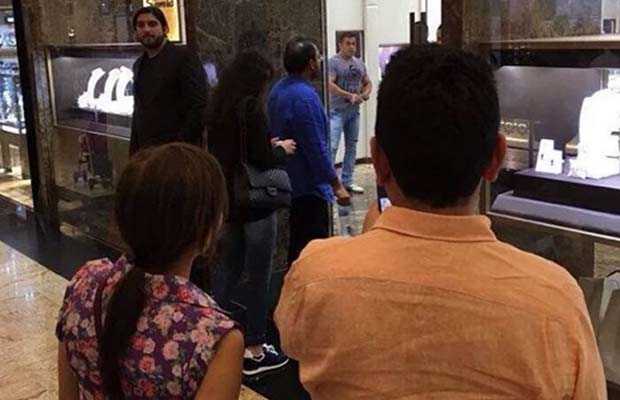 [tps_footer]Bollywood actors undoubtedly have huge fan following and not only in India, but across the globe. It doesn’t come as a surprise when Salman Khan and Shah Rukh Khan’s die-hard fans come up publicly displaying their love and affection for the actor in some of the unexpected gestures.

Salman Khan, who was recently spotted in Dubai with Iulia Vantur, had fulfilled the wishes of his fans out there. Fans can go at any extent to catch a glimpse or click a picture with their favourite star. Reportedly, a family was ready to do anything to just get a picture with Salman Khan and the ‘Being Human’ star instantly agreed to it.

The ‘Bajrangi Bhaijaan’ actor was spotted posing for the pictures with the family. One can see in the picture, Salman Khan is holding an adorable kid in his arms while other family members are posing with the actor. The little kid and Salman Khan’s smile is something that will make your day!

Well, apart from his crazy fan following, Salman is also in news for his personal life. Salman Khan might not have accepted on dating his alleged girlfriend Iulia Vantur, but his recent getaway with Iulia Vantur in Dubai indicates a lot on his relationship status. The actor was also spotted shopping jewellery at a jewellery shop in Dubai, assuming it a pre-wedding shopping? Well, time will tell better!

Meanwhile, Salman will soon head to Haryana for the shooting of his upcoming film Sultan opposite actress Anushka Sharma. Directed by Ali Abbas Zafar, the film is slated to release this year on Eid.