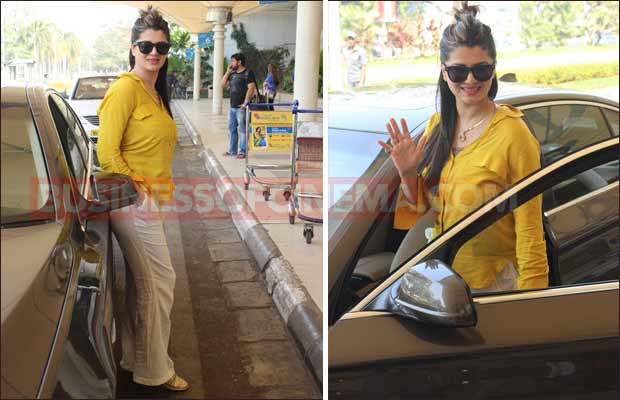 Kriti Sanon was all smiles for the cameras as she arrived at the airport. A grey printed top, faded jeans with black patch on the knees and black boots rounded her airport look. Shraddha Kapoor was seen clicking selfies with her fans as she arrived from her trip. The ‘ABCD 2’ actress kept her look casual- white top, blue sweatpants, white sneakers and rounded sunglasses completed her look.

Father-Son duo Amitabh and Abhishek Bachchan were seen leaving and arriving respectively. Big B sported a track suit while surrounded by a tight security whereas Abhishek was seen in a sweatshirt smiling for the photogs. Farhan Akhtar, too, was clicked by the shutterbugs arriving in Mumbai in a grey sweatshirt and blue denims. The actor is still sporting the long hair and beard for his upcoming movie ‘Rock On 2’. Sunny Deol was snapped in a black T-shirt and blue denims and was leaving to attend box cricket league.

Soha Ali Khan was also snapped looking chic in leather boots, leggings, a skirt underneath and a tribal printed tee layered on. Zareen Khan was snapped in casual attire whereas Suvreen Chawla was clicked in a pink top, washed denims and beige knee length boots. Sophie Choudry kept her look pretty simple in a white top and light blue denims.[/tps_footer]