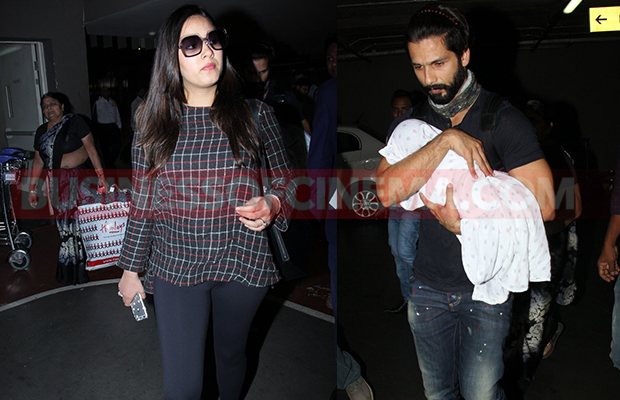 Adorable couple Shahid Kapoor and Mira Rajput were spotted arriving at Mumbai airport from a secret destination along with their princess Misha. Doting father Shahid was seen carrying his daughter in arms and totally wrapped her up in a blanket to avoid getting clicked by paparazzi. The actor was seen holding Misha close to him as he bypassed paparazzi.

On the other hand, Mira looked pretty in a chequered top and black bottom with her sunglasses. The mommy looked cheerful and pretty like always. Mira and Shahid Kapoor never fail to give us relationship goals and moreover, it’s so adorable and amazing to see Sasha being all cautious and caring for his daughter.

“I am getting used to being a working man. I was completely dedicated to fatherhood. I was off work for five months. My daughter is almost two months old now. Every day is amazing with her. You don’t realize how much a child can make you feel. I asked friends having babies for advice and they all said when it will happen you will know,” said Shahid on paternity leave.

On the work front, Shahid Kapoor will be seen in his upcoming film Rangoon that also stars Saif Ali Khan and Kangana Ranaut. Now that Shahid is back from family vacation, the actor will begin with the shooting of Sanjay Leela Bhansali’s Padmavati, starring Ranveer Singh and Deepika Padukone alongside.