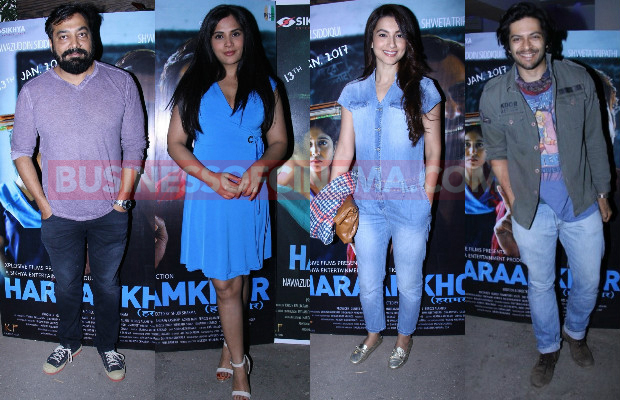 The special screening of Haraamkhor was hosted by Anurag Kashyap at a suburban preview theatre in Mumbai. Celebs in attendance were Manoj Bajpayee, Imtiaz Ali, Vikas Bahl, Gauhar Khan, Kabir Bedi, Jackky Bhagnani, Monica Dogra, Vikram Aditya Motwane, Richa Chadha, Ali Fazal, Jim Sarbh, Rahul Bhat amongst others were spotted at the screening. Haraamkhor is the film which explores the romance between a 14 year old school student and her professor and was recently in news for having won a landmark case against the censor board.

The cast of the film Shweta Tripathi and director Shlok Sharma were the first to arrive followed by Manoj Bajpayee and Anurag Kashyap. Also present was the producer of the film, Guneet Monga. The guests stayed on till late and were seen chatting and discussing the film with great appreciation. Haraamkhor is all set to hit the screens on 13th January 2017.

Catch the film at a theatre near you!