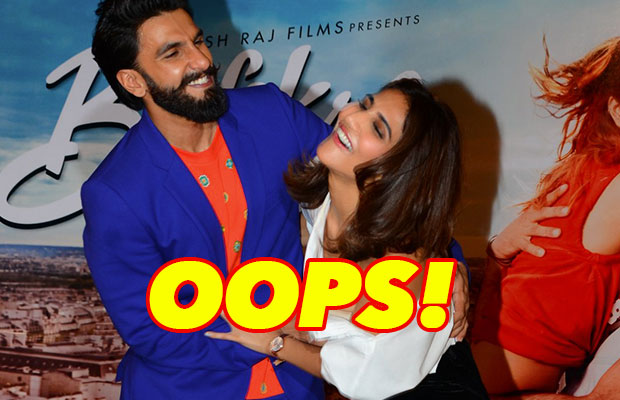 Bollywood stars Ranveer Singh and Vaani Kapoor looked stunning at the recently held promotional event of their upcoming film Befikre. The makers of the film launched Befikre’s new song ‘You and Me’ in a grand manner. The song portrays a happy relationship between the two leads and the special connection they share despite not being lovers. Both Ranveer and Vaani look energetic in the song and the same was witnessed at the song launch event yesterday.

The two excited stars were seen in cheerful and looked totally excited. Like always, Ranveer Singh was looking over enthusiastic and Vaani Kapoor was nowhere behind to match Ranveer’s madness. Well, Vaani looked stunning in H&M separates paired with Louboutin but a little bend and she faced wardrobe malfunction.

Wardrobe malfunction can be unnoticed, but the camera neither forgives nor fails to capture. While hugging and posing with Ranveer for the shutterbugs, Vaani Kapoor’s one-sided off shoulder fell off more than it should have. Nevertheless, she looked uber chic in classy attire!

Talking about the film, Befikre marks the comeback of Aditya Chopra as director and stars Ranveer Singh and Vaani Kapoor in the lead. The film has been extensively shot in Paris and is slated to release on December 9.