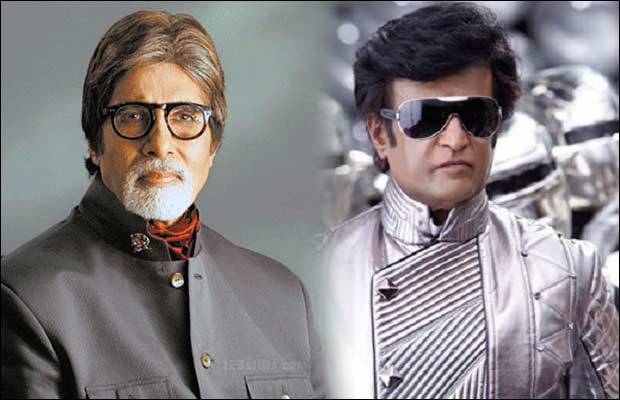 [tps_footer]Superstar Amitabh Bachchan is filled with back to back projects in his kitty. The senior actor who is till date one of the busiest stars of the tinsel town was also going to be a part of Rajinikanth starrer film ‘Robot 2′. Film ‘Robot 2′ is already much waited by the masses. The movie which will be a sequel to the film ‘Robot’ which starred actors Rajinikanth and Aishwarya Rai Bachchan, is now ready to roll.

Reports suggested that superstar Amitabh Bachchan was being considered for playing the villain in the sequel ‘Robot 2′. When Business Of Cinema asked Amitabh Bachchan to comment on the same, he said, “Shankar had come to me and he wanted me to play the villain (in Robot 2). I called Rajini. He said, ‘people will not accept you as a villain, so don’t do it’ I said ok.”

Amitabh Bachchan clearly hinted at the fact that he will not be seen as a villain in the film ‘Robot 2′. Further when Big B was asked about being a part of the film ‘Dhoom 4′, he said, “I heard it for the first time.”

Well, that’s not all. For all the fans who are waiting for the sequel of the film ‘Aankhen’, Amitabh Bachchan has himself confessed on it saying, “We will start Aankhen 2 in March. I play the same role.” The mind blowing superstar Amitabh Bachchan will soon be seen in the film ‘Wazir’.

‘Wazir’ also stars actors Farhan Akhtar and Aditi Rao Hydari in lead roles. The trailer of the film ‘Wazir’ is extremely adored by the audience. The curiosity filled movie is schedule to release on January 8th, 2016.[/tps_footer]