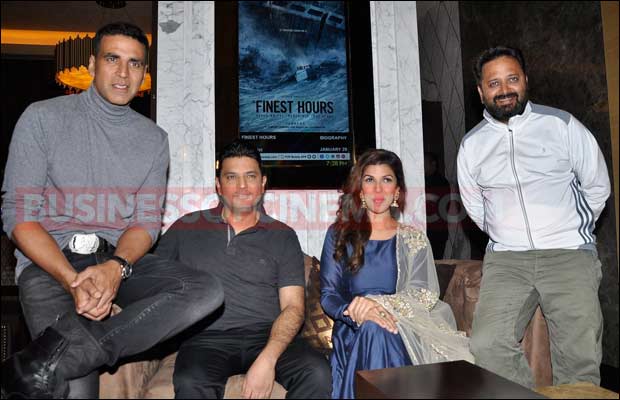 [tps_footer]Bollywood actors Akshay Kumar and Nimrat Kaur are starring together for the first time opposite each other in a biopic, ‘Airlift’. The actors are on their last leg of promotional spree. ‘Airlift’ released on January 22 and has received tremendous amount of positive response from the audience. Akshay ‘s performance has been highly appreciated by the critics and the audience. Most of them say that this movie is the actor’s best film till date.

The ‘Airlift’ stars Akshay and Nimrat along with Nikhil Advani and Bhushan Kumar visited a local theatre and gave a huge surprise to their fans on January 26, 2016. The actors looked pretty happy with the response they received from the audience present in the theatre. Akshay was seen cheering along with the fans and Nimrat was enjoying the moment. The actors spoke to audience, chatted with kids and clicked many pictures. Choreographer Ganesh Acharya was also seen chatting with Akshay. Nimrat chose to wear a traditional outfit for the event. The actress was clicked in a royal blue anarkali and net dupatta whereas Akshay wore a high neck grey T-shirt and black denims.

‘Airlift’ is based on a real life incident that occurred in Kuwait in the 1990s, during the time of Gulf War. An Indian businessman, Ranjit Katyal, helped in evacuating 1,70,000 Indians, safely, back to their home country at the time of Iraq-Kuwait war.  The movie has crossed the mark of 69crores within 5 days of its release and is expected to reach 80crores in 7 days.