The 10th season of the reality show, Bigg Boss has finally come to an end. The show is keeping its contestants in news even now. Bigg Boss 10 winner Manveer Gurjar is currently making headlines over his secret marriage. While first runner-up VJ Bani is back to her normal life and is seen interacting with her fans.

The other contestants of the show are also making headlines for some or other reason. They are also seen having a good time after getting back to the real world. Each contestant is seen uploading Bigg Boss 10 after party photos and sharing their memories. The only person who has gone missing since the grand finale is none other than Manu Punjabi.

To our notice, Manu Punjabi has been missing since the grand finale. In fact, he was also missing in after party pictures along with his bestie Manveer Gurjar. While Lopamudra Raut, Nitibha Kaul, Akansha Sharma and Lokesh were present with him. Well, Manu Punjabi made it to the top four in Bigg Boss 10 and walked away with Rs 10 lakh.

It seems, not making it to top 2 or being a winner has upset Manu somewhere as he was undoubtedly one of the strongest contestants on the show. Nevertheless, Jaipur boy Manu Punjabi has reached back home on Tuesday and was welcomed by garlands and sweets. Also, as he has lost his mother, Manu does not want much fanfare and is keeping his celebrations subdued.

Last night, Manu also uploaded a photo of him with his fiancé Priya and captioned it as, “Coming back to# home ####Miss u big boss abb Kon dategaa #love” 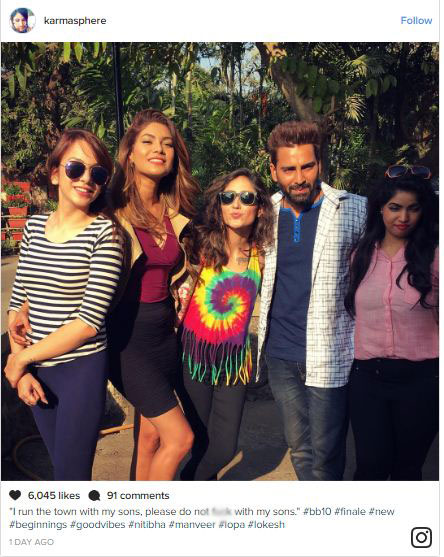