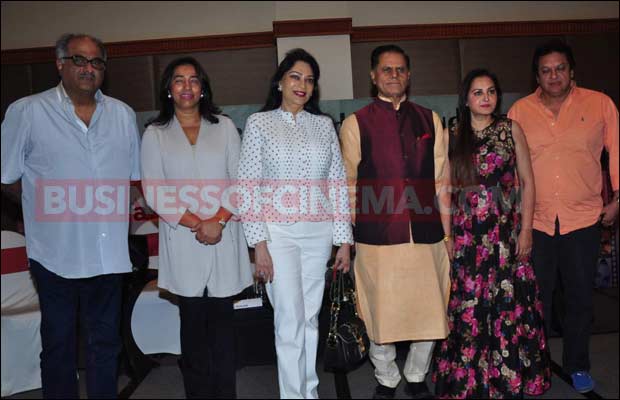 [tps_footer]Bollywood veteran actresses Simi Garewal and Jaya Prada attended the press conference of Yash Chopra Memorial yesterday December 16, 2015. The jury comprised of T. Subbarami Reddy, Boney Kapoor, Shashi,and Anu Ranjan. Hema Malini was supposed to be part of jury, due to some reason she could not be present at the event. While Pamela Chopra, who was to be part of jury, couldn’t attend the Press Conference because of ill health.

At the press conference, it was announced that veteran actress Rekha will be honoured with 3rd National Yash Chopra Memorial Award. Lata Mangeshkar was the recipient of the first award in 2014 followed by superstar Amitabh Bachchan in 2015.

During media interaction, Simi Garewal opened up on talking to Rekha about Amitabh Bachchan. A decade after she interviewed Rekha on the 100th episode of her talk show, actress and TV host Simi Garewal said that she had no trouble getting her subject to speak about actor Amitabh Bachchan. Without any hesitation, Simi said “It was easy asking her the question about Amitabh. If I can ask Jayalalitha if she ever loved MGR, asking Rekha about Amitabh was much easier. A lot of people ask me how I got her to open up. I didn’t know if I did anything special. I don’t want to analyze it. I just chatted as good friends. Rekha and I go back a long way.”

When asked if it was unfortunate Amitabh and Rekha never worked together again, Simi said, “After all that controversy, I don’t think it was an easy thing to happen. He is a married man with children and grandchildren. So much hungama happened that we couldn’t expect that to happen again but I do agree they make a lovely pair onscreen.”

Rekha and Amitabh were co-stars in 10 films and were rumoured to have been an off-screen couple as well, despite him being married to actress Jaya Bhaduri.[/tps_footer]