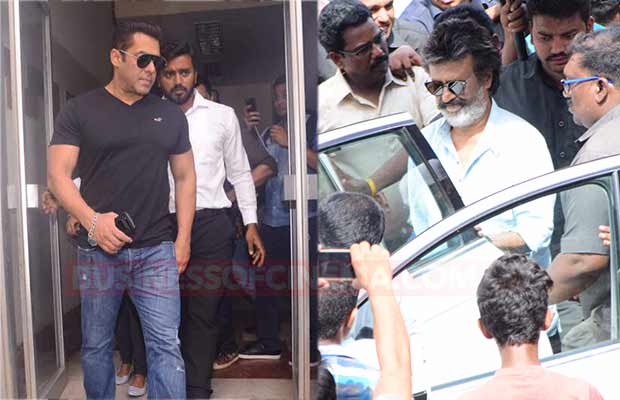 A bevy of stars were spotted by the shutterbugs like Rajinikanth and Salman Khan. Rajinikanth is in the city these days for shooting his upcoming film, Kaala.

In the pictures, we can see Rajinikanth fan following in Mumbai and how people respect him here just like Tollywood.

Rajinikanth can be seen joining his hands (Namaste) to his fans as they gathered to catch a glimpse of the South Superstar.

Rajinikanth will be portraying the role of a gangster in Kaala.  The film will be set in the background of Mumbai and will have underworld connections in the story. The movie is being helmed by Kabali director Pa. Ranjith, will shoot 40 percent of its portion in Mumbai.

Rajinikanth will also be seen in 2.0 which is the sequel to Robot. Rajinikanth will be seen alongside Akshay Kumar and Amy Jackson in 2.0. The film is helmed by director S.Shankar. At the time of filming, with an estimated budget of ₹450 crore (₹4.5 billion), it was the most expensive Indian film made. The film is expected release worldwide on January 25, 2018.

On the other hand, Salman Khan was also spotted in the city. Salman was shooting for his venture Tiger Zinda Hai in Abu Dhabi. But looks like he is back in the city. Salman’s co-star from the film Katrina was also spotted with his nephews hitting the gym. Looks like their Abu  Dhabi schedule is over. Salman was seen wearing a black V-neck t-shirt and denims. He also had his shades on.

On the work front, Salman Khan will next be seen in Kabir Khan’s Tubelight. Tubelight also stars Salman Khan’s brother Sohail Khan and Chinese actress Zhu Zhu in the lead roles. Shah Rukh Khan will be seen doing a cameo in the movie. With this, Salman and SRK will be seen sharing screen space after almost a decade. We are excited.

Apart from this, Salman will also be seen in Tiger Zinda Hai which features Katrina Kaif in the lead role.