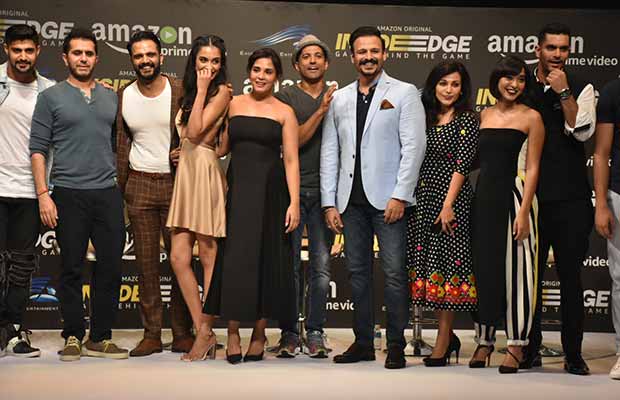 The trailer of ‘Inside Edge ‘ was unveiled yesterday in front of media; at a gala event held in the suburbs of Mumbai.

The entire star cast of the show was present including Vivek Oberoi, Richa Chadha, Angad Bedi, Sayani Gupta and many others at the event.

The trailer was loved by everyone present and has created an eagerness amongst the audiences for it.

Producers of the series were present along with the cast; all of them were in full spirit and were addressing the media during Q and A.

Ritesh Sidhwani shared his experience on his first digital venture,“It’s exciting, I have been watching a lot of these shows, I can only talk of the one, I have seen on this platform, I will start with ‘Man in the High Castle’ or ‘Goliath’, I have loved them, I think the entire format of these show are binge watching, and I remember calling Ritesh almost two years ago and said, listen we have developed some originals and, I think to be really interesting to have on your platform, and he said,’Right now I am looking only looking at licensing films and not thinking about originals’, so I said whenever you do, give me a call because I have some ideas which we have been developing and it started from there and now finally its made it on the 10th of July, the first original will be out and I am looking forward to it”

Farhan Akhtar said on discovering the project,“Well I mean to start with, it’s really creating content and creating entertainment on a different platform, so you need to think differently, also the episodic nature allows you to create things you can’t do in film, so it was bit of a challenge, because it’s a new format for all of us, digital is something we enjoy watching, but now that we are getting into creating it, you have to put on a different hat you know when you are doing it, and then of course to have partnered with Amazon Prime and you get the freedom to create it, and the kind of the show, we wanted to with this, and of course with their help, its been a tremendous journey”

Nitesh Kripalani head of Amazon India added,“Well we think it will be the best consumed show, not only on Amazon but also across all video services thats the goal,our expectation is that it will be the first step, the foundation, of changing how creators create content, it’s looking at how you take the current tv series that we have created in India and upping the bar and raising the bar for that, so our goal is everybody should watch it, a lot of our customer should watch it, it should be the most talked about show globally not only in India, but over 200 countries and territories it should be the show which makes an impact for bringing Indian talent to the world”

Inside Edge is a web series launched by Excel Media & Entertainment in association with Amazon Prime Video.

Excel Media & Entertainment have also few more interesting shows with Amazon Prime in the pipeline after Inside Edge.

Excel Media & Entertainment, a division of Excel Entertainment, one of the leading production houses of Bollywood that is widely known for their much-acclaimed films like Dil Chahta Hai, Lakshya, Rock On, Dil Dhadakne Do and Zindagi Na Milegi Dobara, will be collaborating with Amazon Prime Video to develop original content for the OTT service! This association marks the first of its kind wherein one of India’s leading production houses will join hands with world’s leading OTT content providers.