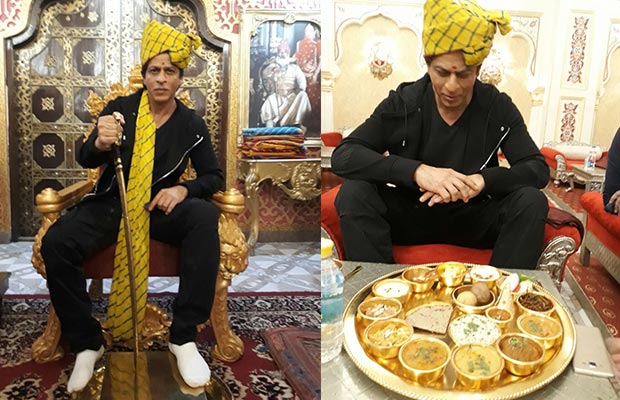 Shah Rukh Khan who has been on a promotional spree, visited Jaipur yesterday to interact with the masses. The actor has been receiving immense love from the Rajasthani’s who have been leaving no stone unturned in making SRK’s visit a memorable one.

The actor was hosted by a renowned Rajasthani restaurant and was treated with a special Rajasthani Thali. It was for the first time that Shah Rukh was relishing on authentic Rajasthani cuisine and the actor made most of his appetite.

Shah Rukh Khan was seen gorging on Dal Baati Churma in a gold thali that left his taste buds satisfied.

The restaurant created a royal ambience to mark Shah Rukh Khan’s visit and welcomed him traditionally with a worship plate and tikka in addition to presenting him with a pagdi, Rajputana sword and garland. Rajasthani singers were also placed to recreate some of Shah Rukh Khan’s most iconic songs with a Rajasthani twist.

Hordes of people made their way to the location to catch a glimpse of Bollywood superstar.

The Jaipur visit proved to be a memorable one for Shah Rukh Khan, who said, “I had just heard of dal baati. It’s fantastic and really nice. I wonder how people finish this food it’s really filling and very tasty. For me it’s a 1st-time experience, now I will come here once in three months at least“.

Shah Rukh Khan has been visiting multiple cities to promote his upcoming film ‘Jab Harry met Sejal’ amidst the masses. The actor was on a 2 day visit to Jaipur but had his schedule altered to accept an Honorary Membership accorded to him by the Jodhpur Tourist Guide Association yesterday.

The actor then took to the job of a guide and toured one of India’s largest fort, Mehrangarh Fort in Jodhpur.

Shah Rukh Khan with be seen playing the role of a guide in Imtiaz Ali directorial ‘Jab Harry met Sejal’ where he will be seen romancing Anushka Sharma.

Presented by Red Chillies Entertainment, ‘Jab Harry met Sejal’ is directed by Imtiaz Ali. The film is all set to release on August 4th, 2017. 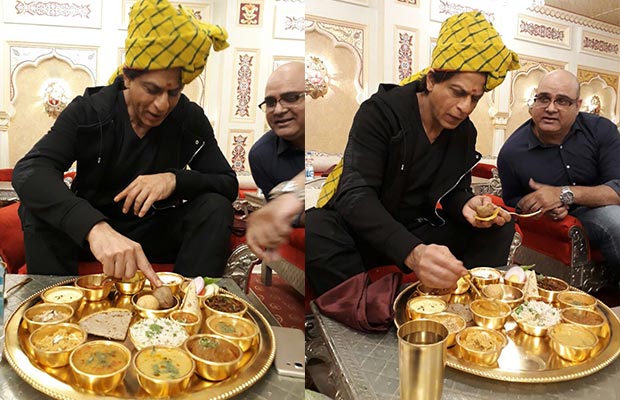