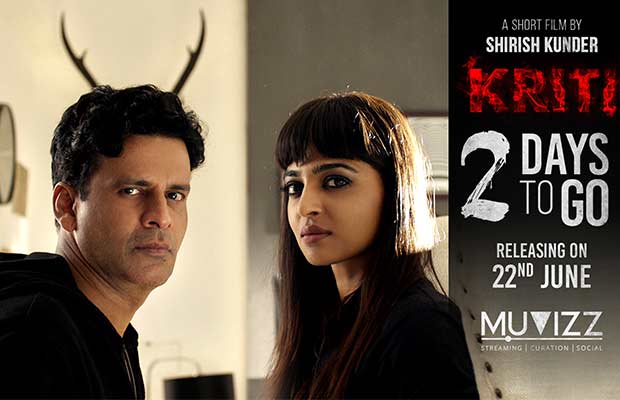 [tps_footer]After creating a phenomenal masterpiece ‘Taandav’, the talented actor Manoj Bajpayee and the online portal ‘Muvizz.com’ are back again with another interesting short film titled ‘Kriti’. Directed by Shirish Kunder, the short film is a psycho thriller starring Manoj Bajpayee, Radhika Apte and Neha Sharma in the lead.

Living up to his epitome of versatility, Manoj Bajpayee will be seen portraying the role of a writer who after an unexpected set of events finds himself in the middle of a psychological drama. The gorgeous and hardworking actress Radhika Apte will enthrall the audience with her mysterious character along with young actress Neha Sharma. The 18min long short-film is also director Shirish Kundar’s debut in the short film world. Producer of the film and owner of online platform ‘Muvizz.com’, Piiyush Singh believes in making a mark in the industry and audiences with its crisp content and the outstanding performances by the actors.

Talking more about it the fine actor Manoj Bajpayee says, “Short film is a way to think out of the box and Shirish Kunder, is the right person not only an amazingly talented person but also a great thinker, somebody who doesn’t like to socialize, doesn’t want to mingle with outside society but also all the time he is trying delve into different ways of telling stories. Kriti was a genre which is one of my favorites. Thriller and psychological drama and seems so exciting for me that immediately i said yes to Shirish. Also Muvizz.com is my second passion and as it was for Muvizz.com, it gave me all the reasons to take a dip into it and come out quite happy.