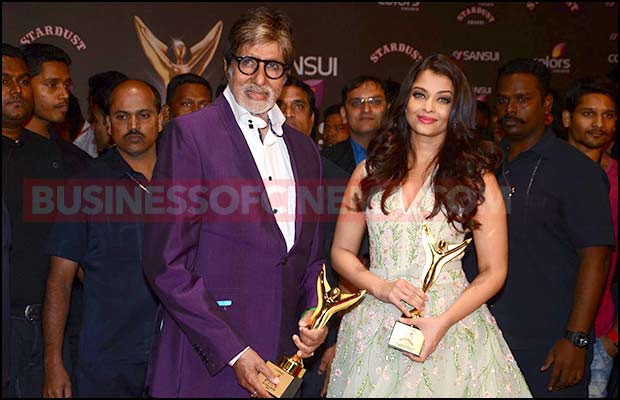 [tps_footer]Aishwarya Rai Bachchan surely knows how to impress the masses with her immense talent. The actress who made a comeback after a sabbatical with the film ‘Jazbaa’ went on to win the title of Best Actor (Female) at the Stardust Awards. The beautiful star surely was on cloud nine after winning the award. Film ‘Jazbaa’ did not show much wonders in its box office collections but surely paved a way for Aishwarya Rai Bachchan’s successful come back.

It was double celebration for the Bachchan family, not only did Aishwarya Rai Bachchan win hearts with the film ‘Jazbaa’ also father in law Amitabh Bachchan gained laurels for his performance in the film ‘Piku’. Amitabh Bachchan won the award for the Best Actor (Male) for the films ‘Piku’ and ‘Shamitabh’. Big B was undoubtedly happy with Aishwarya’s achievement.

The senior Bachchan also took to the micro blogging site Twitter to share a picture of himself and Aishwarya Rai Bachchan with the awards. The mind blowing senior superstars tweeted, “T 2087 – And the family wins too am award for her film ‘Jazbaa’ ..” 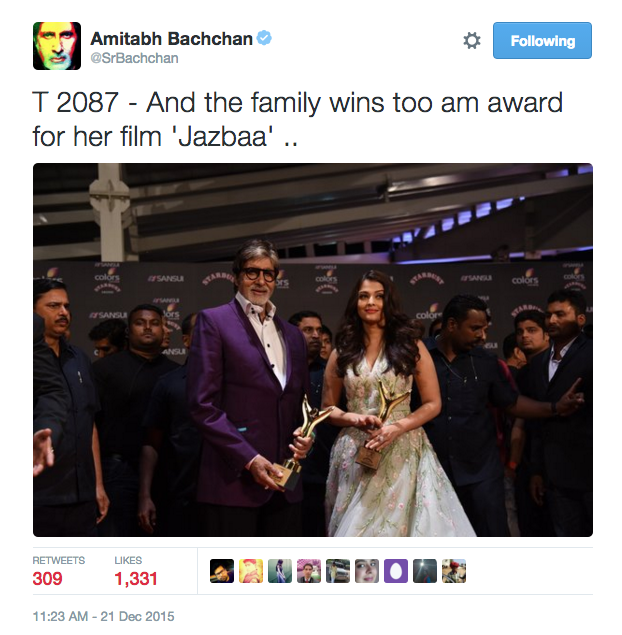 The two winners were also spotted by the lenses at the award ceremony in a candid manner. Aishwarya Rai was spotted while she was sharing something with Amitabh Bachchan. Must say, the Bachchan family is a house of talents.

After the film ‘Jazbaa’, Aishwarya will soon be seen in Karan Johar’s ‘Ae Dil Hai Mushkil’, whereas Amitabh Bachchan is gearing up for his upcoming film ‘Wazir’. The Stardust Awards was a star studded affair with almost all B-Town celebrities making their appearances.[/tps_footer]