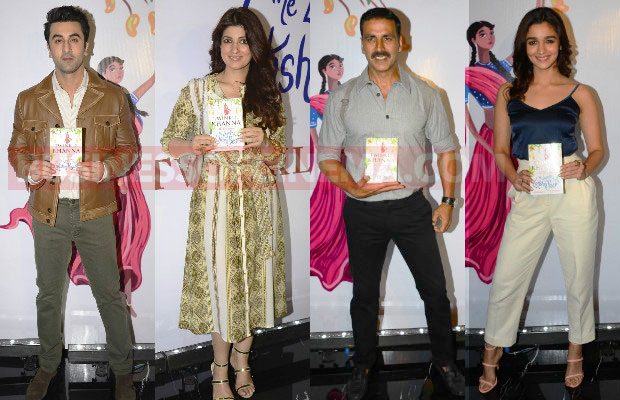 Akshay Kumar’s wife and Bollywood actress Twinkle Khanna launched her second book, The Legend of Lakshmi Prasad, a collection of four short stories, in Mumbai on November 15. Looking classy like always, Twinkle Khanna made some bang on confessions and statements at the launch event in Juhu. Bollywood stars Ranbir Kapoor, Alia Bhatt, Atul Kasbekar, Karan Johar, Dimple Kapadia, Sonali Bendre and Shabana Azmi were also present for the book launch. Also, Akshay Kumar was present with their son Aarav, who were cheering Twinkle Khanna from the front row.

At the event, Twinkle made fun of Karan Johar over his interview with Alia Bhatt on Koffee With Karan last season. The infamous interview had put Alia embarrassed and lots of “dumb memes” were launched on her.

Also, Twinkle Khanna revealed that how her mother Dimple Kapadia constantly tried to put her diet but she never did it. “My granny would always moan about the fact that I never brushed my hair and my mom would always try to put me on a diet and I would tell her I wouldn’t fit in. I would ask her why do I need to fit in a size for a dress?” Twinkle said at the launch.

At the end of the book launch, Twinkle Khanna thanked her family and also shared how her husband Akshay Kumar is proud of her work. “This book is dedicated to him. He is my biggest cheerleader, my greatest support. He is a man who takes more pride in my work than anyone ever has, including my mother who is all the time kind of… Like somebody came up to her and said, ‘Your daughter is a good writer’ and she shouted and said, ‘This junglee?!’ So, I am very fortunate to have this man with me,” Twinkle said.

CLICK NEXT TO SEE PHOTOS FROM THE STAR-STUDDED EVENT!