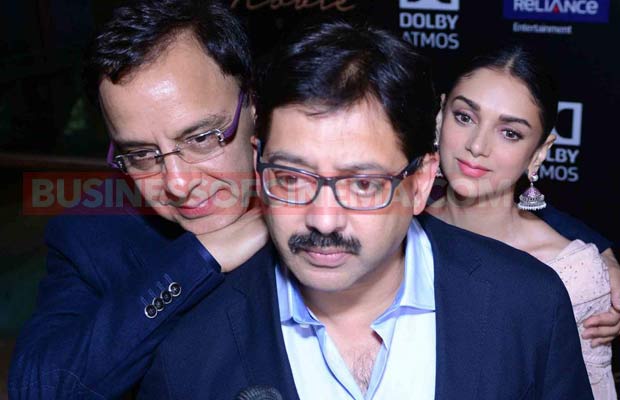 [tps_footer]Bollywood actors Amitabh Bachchan, Aditi Rao Hydari and Farhan Akhtar are starring in drama thriller, ‘Wazir’. The actors have been on the promotional spree for the movie. Farhan and Aditi along with their producer Vidhu Vinod Chopra, Abhijat Joshi and director Bejoy Nambiar attended the special screening of ‘Wazir’ in Delhi on January 5, 2016. Amitabh Bachchan was missing from the event due to other commitments.

Delhi Chief Minister Arvind Kejriwal grabbed major eyeballs as he was one of the attendees of the special screening. The politician was greeted by producer Vidhu Vinod Chopra and actor Farhan Akhtar. All of them were delighted to meet each other and also posed for the shutterbugs. Other attendees were Vidhu’s close friends who were happy to be part of the screening.

Farhan Akhtar went for a comfy look wearing a maroon T-shirt, grey sweatshirt and blue denims. Aditi Rao Hydari looked elegant in Sukriti and Aakriti outfit. The actress wore a long kurta that had a fitted bodice and a chiffon flared skirt. Amrapali earrings and ring and a sleek middle parted hairdo completed her screening look.

‘Wazir’ trailer received immense appreciation from audiences. The fans are very excited to see Amitabh Bachchan and Farhan Akhtar on the celluloid together for the first time. The trailer looked compelling and acting is very impressive. The film also stars Neil Nitin Mukesh, John Abaraham and Manav Kaul in pivotal roles. Written by Abhijat Joshi and Vidhu Vinod Chopra, ‘Wazir’ showcases Farhan Akhtar as an action hero for the very first time on silver screen. Directed by Bejoy Nambiar, ‘Wazir’ is all set to release this Friday on January 8, 2016.[/tps_footer]