Recently, Adnan Sami posted some pictures of his newly born baby girl Medina, and she is cuteness overloaded.

Adnan Sami manages to be in the news every once in a while. Be it his struggle for Indian Citizenship that brings him into the limelight or his drastic weight loss.

Recently, the singer who has given several hits like ‘Baatein Kuch Ankaheen Si, ‘Bhardo Jholi Meri’ and Sun Zara, never ceases to mesmerize his fans with his soothing voice. He made his acting debut with ‘Afghan – In Search Of A Home’, directed by Radhika Rao and Vinay Sapru
And was highly praised for his performance.

Adnan Sami recently posted pictures of his newly born on his social media handle and she is literally like an angel on earth! Married to gorgeous Roya Sami, the beautiful couple gave birth to an adorable baby girl, Medina on 8th May this year.

Ever since he news broke out about his newly born, his fans were eager to see the cute face of his daughter. Adnan never disappoints his fans and recently posted the pictures of his daughter, dressed in beautiful red dress where she looks like a baby princess ready to conquer the world already!

In one picture we see the couple kiss their daughter, while in other we see Adnaan smiling as he looks at her angelic face and we can’t stop AWWing about it!

The couple seems to have had a photoshoot to capture those perfect moments. The pictures clearly bring out their happiness within, through the ever-so-real beautiful smiles!

On being asked about the reason behind naming their Medina, Adnan told a leading daily, ”I have named her after the city of Medina, which embraced Prophet Mohammed when he was forced to leave Mecca. Even today, the city is known for its love and hospitality. It’s also here that you’ll hear the most beautiful Azaan, immersing you in a wave of spirituality. So, I felt that Medina was an apt name for my baby.”

We hope this new phase in their journey brings them all the happiness and luck and we are so sure they’d make amazing parents to a beautiful,beautiful daughter.

I can’t begin to tell you the joy a father feels from having a baby girl… Thank you dear God!!?? ????? #GreatestGiftofAll #HappyFathersDay  #MedinaSamiKhan 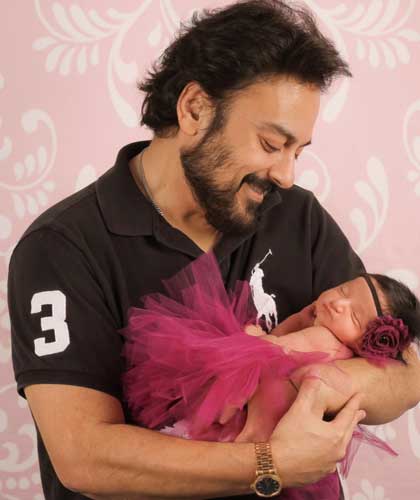