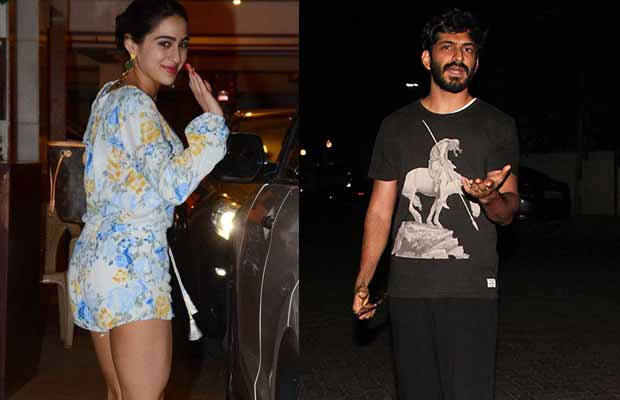 Last night Harshvardhan Kapoor was spotted outside Sara Ali Khan’s house. Harshvardhan was not happy to be clicked by the Paparazzi. He was dressed in casual clothing.

This is no rumour. It is confirmed that Anil Kapoor’s son Harshvardhan Kapoor and Saif Ali Khan’s daughter Sara Ali Khan are dating. The speculations of their relationship aren’t new. It all started when the star kids were spotted on a lunch date at a popular eatery in the city. Their dating rumour left everyone stunned. But eventually, the star kids are not actually kids anymore, they are grown-ups and in love.

According to a leading daily, the two are very fond of each other and their close friends are very happy for them. Love is clearly in the air for B-tow star kids. Apart from Sara and Harsh, rumours are rife that Sridevi and Boney Kapoor’s daughter Jhanvi Kapoor and Shahid Kapoor’s brother Ishaan Khattar are allegedly dating too.

Just a few days ago, we told you how elder brother Shahid Kapoor is upset with little brother Ishaan Khattar. Reportedly, Shahid wants Ishaan to stay away from matters of heart. Shahid is being a protective elder brother and has imposed a ‘No Dating Policy’ on Ishaan. He has asked him to not make any appearances until his debut film releases. But it was just about day before when we spotted Jhanvi Kapoor and Ishaan in the same car at the screening of Baywatch. This must have added more flame to the fire. Well, they could be just friends bbut you know how it works for star kids.

We are hoping that just like Ishaan and Jhanvi, Sara and Harsh too hang out together without any qualms.

Talking about Sara Ali Khan and Jhanvi, the young beauties are all set to make their Bollywood debut soon. They have been training hard, while Jhanvi often makes heads turn with her HOT avatar at events.