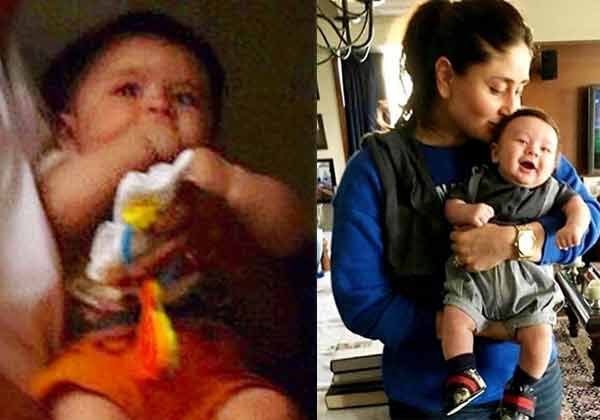 Have a look at Kareena Kapoor Khan’s Taimur Ali Khan Pataudi’s picture: You are going to love it

Kareena Kapoor Khan’s pictures with Taimur Ali Khan Pataudi are doing the rounds on social media and we just can’t get enough of his cuteness.

Taimur Ali Khan was recently clicked when he went out with mommy Kareena Kapoor Khan and his nanny to Karisma Kapoor’s house. One can see in the photos, Taimur is cradled in his nanny’s arms. He is looking cute as usual as he smiles and looks at his mother.

Taimur was born on 20th December in 2016 and the baby has completed 5 months in May. Since then his pictures have always gone viral on the internet. His birth picture with mother Kareena was the most cutest one and now the latest images of the little munchkin are already ruling the Internet.

Taimur pictures with Kareena Kapoor Khan shows that Taimur is a happy child and very photogenic.

Recently, Kareena Kapoor Khan could not make it to Karan Johar’s birthday bash. On Sunday night, the actress along with her other best friends personally went to wish him a belated happy birthday on Sunday. Kareena Kapoor Khan was spotted wearing a grey T-shirt with her hair tied up. Malaika Arora and Karisma Kapoor looked gorgeous in white. Malaika looked stunning in a white dress that had a pretty frilled neck. The three girls were accompanied by Manish Malhotra, who arrived at the party with Kareena.

Kareena Kapoor Khan has lost lots of weight post pregnancy by doing yoga and kickboxing. The actress had put on 18kgs during her pregnancy and now has lost a good bit of it within months after pregnancy. This lady is an inspiration to all!

Kareena Kapoor Khan will be seen returning to her acting career with the movie Veer Di Wedding, to be directed by Shashanka Ghosh. Sonam Kapoor and Swara Bhaskar will also be seen in the movie.