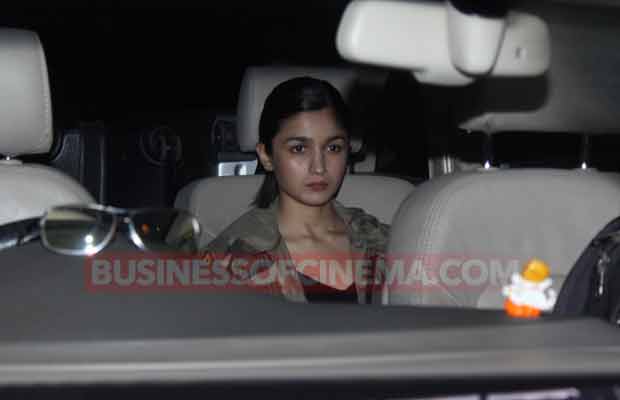 One of the most prestigious awards of the Indian film industry is the International Indian Film Academy Awards. It is popularly known as the IIFA Awards. This year, the location for IIFA if the New York City and our Bollywood stars have already started leaving for the city to attend the event.

The 2-day event is going to take place on July 14 and July 15. It was yesterday only when we had shown you all celebs like Karan Johar, Saif Ali Khan, Disha Patani and others leaving for NYC. We had also spotted Shahid Kapoor with Mira and Misha.

And now another B-town actress Alia Bhatt has left for IIFA. But interestingly, before leaving she went to meet someone special. The ‘Badrinath Ki Dulhaniya’ actress visited her rumoured beau Sidharth Malhotra’s residence before leaving the country.

Spotted in a military jacket over a black short dress, Alia was looking all set for the long journey.

On the professional front, Alia Bhatt was last seen in ‘Badrinath Ki Dulhaniya’ opposite Varun Dhawan. She is currently working with Ranbir Kapoor for Ayan Mukerji’s ‘Dragon’. She is also to be seen sharing screen space with Vicky Kaushal in Meghna Gulzar’s ‘Raazi’.

On the other hand, Sidharth Malhotra is going to be seen with Jacqueline Fernandez in the August 25 release ‘A Gentleman’. He is also coming with the film ‘Ittefaq’ with Sonakshi Sinha, which is slated to release on November 3, this year.