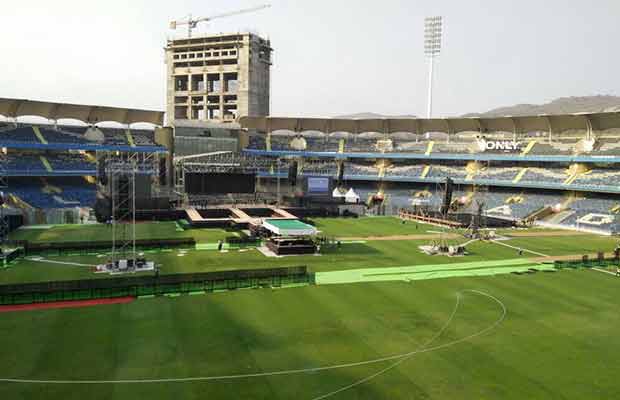 The international pop sensation, Justin Bieber’s maiden performance in India at Mumbai’s D.Y Patil Stadium is making hype in the city and the preparations look just on point.

The madness has begun! Justin Bieber has arrived in Mumbai last night amid heavy security and Beliebers are gearing up for the concert that is happening today at the D.Y Patil stadium in Nerul, Navi Mumbai. The excitement and madness among the fans are building with each passing minute. Well, not only commoners. The show will feature fireworks, confetti, laser, graphics on big screens.

The stadium is set, fans have arrived with their huge priced tickets to catch their favourite pop singer live. While fans are prepping up to witness the madness, here’s everything that’s going on in the stadium for the 23-year-old pop singer.

Justin Bieber will be choppered to a ground next to the stadium around 5 – 6 pm and so will some of his fans. There will be a chopper service available for his fans from Mahalaxmi race course in order to skip Mumbai’s heavy traffic. The Royal Western India Turf Club helipad is accessible at a rate of Rs. 38,000 for non-members and Rs. 16,000 for members, for half hour slots.

While Hardwell has also performed a concert at the D.Y Patil Stadium in the past, such luxurious arrangements had never been made and fulfilled.  The excitement is REAL!