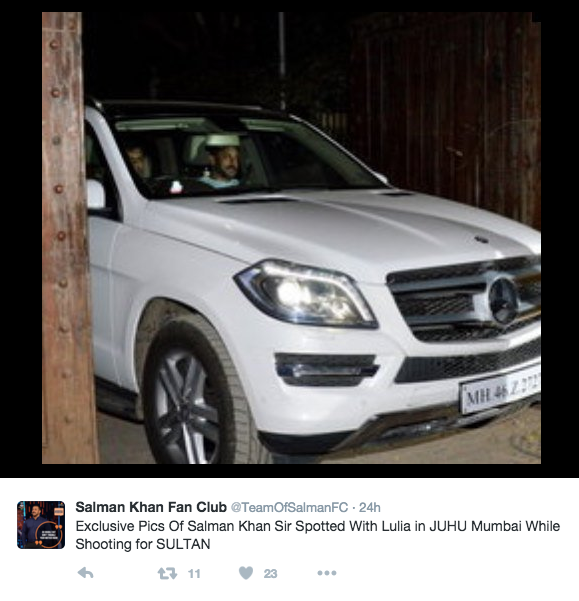 [tps_footer]Lately, Bollywood actor Salman Khan trashed all the rumours on his secret engagement with Romanian TV star and model Lulia Vantur. Both Salman and Lulia have been meeting each other, but never came out publicly. This time the rumoured couple was finally caught together.

After Arpita Khan Sharma’s wedding last year, Salman Khan and Lulia Vantur were spotted together after a long time. While Salman Khan was sitting on the front seat of the car, Lulia was back seated and was all chilled out when shutterbugs caught them.

Just when they were leaving in their car from Dhawan’s residence late night, shutterbugs caught them and interestingly both of them weren’t surprised at all.

Well, Salman Khan’s love life has always grabbed the attention and now that the actor was spotted with the model again, we wait to hear some good news soon from the actor.

Also there are possibilities that the actor is planning to launch Lulia in Bollywood and so he paid a visit at Dhawan’s residence to discuss on the same. Well, we never know what are they up to. Right now the question on Salman Khan’s marriage is speculated.

Earlier during the promotions of his Prem Ratan Dhan Payo, the actor was asked about the rumours on his alleged engagement with Lulia Vantur. To which he replied saying that there is nothing truth in the news and that he was enjoying all the rumours.about his engagement.

Currently, Salman Khan is busy with the shooting of his much talked film Sultan. The actor is also in limelight for the most loved controversial reality show Bigg Boss 9 Double Trouble.[/tps_footer]