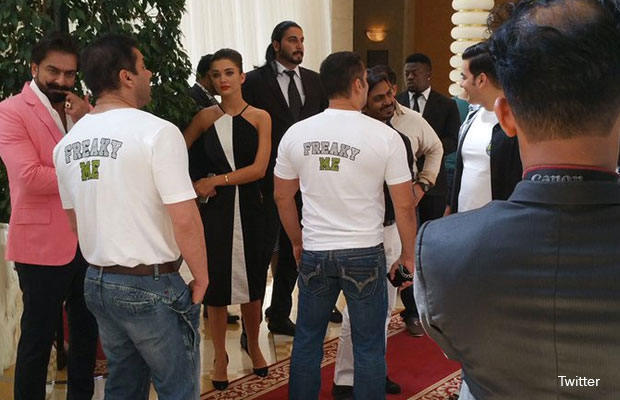 Bollywood actor Salman Khan has begun with the promotions of upcoming film ‘Freaky Ali’ in Dubai. Freaky Ali, which stars Nawazuddin Siddiqui and Amy Jackson in the lead roles, has grabbed all the eyeballs since its release. Moreover, Freaky Ali is in the limelight, as Salman is promoting the film. The handsome hunk is currently in Dubai for the promotions along with Arbaaz Khan, Sohail Khan, Nawazuddin Siddiqui and Amy Jackson.

Bollywood’s talented actor Nawazuddin Siddiqui is back again with his another power packed performance in Sohail Khan’s directorial “Freaky Ali“. Featuring Amy Jackson as his love interest, Arbaaz Khan as his friend, Nikiten Dheer and Jas Arora as the rich golfer, ‘Freaky Ali‘ is entertaining and a must watch film!

The film is about how golf game of the super elites can be mastered by a poor layman too. And the golfer is none other than Nawzuddin Siddiqui. The trailer has been executed very well and the punch lines in the trailer are going to make you laugh out loud. We bet!

The film will be clashing with Sidharth Malhotra and Katrina Kaif’s Baar Baar Dekho on September 9.