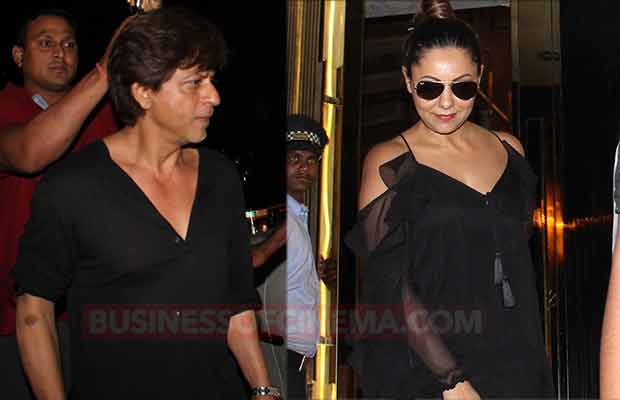 Shah Rukh Khan starts the week with a dinner outing with wife Gauri Khan and other friends.

The Bollywood actor Shah Rukh Khan, although, is always very busy with his tight schedule. But the actor never fails to spend some quality time with his family and friends.

It was yesterday, in the Monday night when the Raees actor was spotted on a dinner outing with wife Gauri Khan. He had also invited some of his friends including Amitabh Bachchan’s daughter Shweta Bachchan Nanda, Javed Akhtar’s daughter and the filmmaker Zoya Akhtar, Sanjay Kapoor’s designer wife Maheep Kapoor and another friend Kaajal Anand.

Gauri Khan was looking extremely stylish in that black layered top paired with ripped blue denims and metallic-look sneakers. Carrying a black handbag with her hair tied in a high bun, Gauri was looking stunning.

Shweta Bachchan Nanda opted to go for a very casual look with a blue jacket over a grey t-shirt and track pants. Zoya too was in a semi-casual look in those black top and grey palazzo.

He is also working in Anand L Rai’s untitled next in which he will be seen playing a dwarf. This film also features Anushka Sharma with SRK, in addition to Katrina Kaif. The trio will be seen on the screens together after the 2012 release ‘Jab Tak Hai Jaan.’