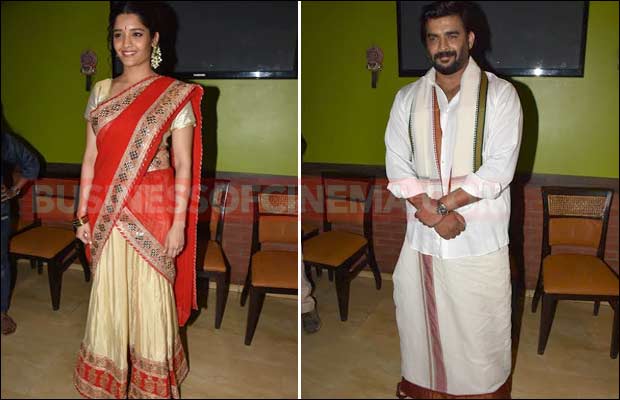 [tps_footer]R Madhavan, who is a Tamilian, celebrates the festival of thanks giving for the good harvest season, every year,

Pongal is known as the Tamil New Year and this year, the actor celebrated the festival with the team of his upcoming film.

He decided to begin the auspicious day by taking Rajkumar Hirani and Ritika Singh for a traditional Pongal breakfast at a suburban South Indian restaurant.

Raju Hirani, who was celebrating the festival for the first time shared, ” Maddy had invited me and Ritika for breakfast, but early this morning, he arrived at my residence with a veshti (lungi) and he insisted that I dressed in this traditional attire. Initially i was hesitant, but now I am feeling very nice and comfortable in this”

Ritika too was dressed in a traditional outfit.

Talking about Pongal, Madhavan said, “Wish you all a very very Happy Pongal. On this day, we thank Lord Surya for the good yield. We draw rangoli, sing songs and prepare pongal. The pongal is made from the crops that we have grown, and then thank the sun for giving us such good pongal.”

The team is currently busy with the promotions of Saala Khadoos.

Hirani has produced the film for a young director Sudha Kongara Prasad. The director came on board immediately after Madhavan and Sudha narrated the script. It’s a pure sports film which Madhvan is co producing.

The film feature’s R.Madhavan in the leading role, as a boxing coach, who has a reputation of being a task master. This would be his next release after Tanu weds Manu 2.

Interestingly, the female lead of movie, Ritika Singh who plays the boxer in the movie, is a boxer in real life as well.

The content of the film has been receiving tremendous appreciation, and after Ritika‘s launch, there has been a lot of curiosity amongst the audiences around her.