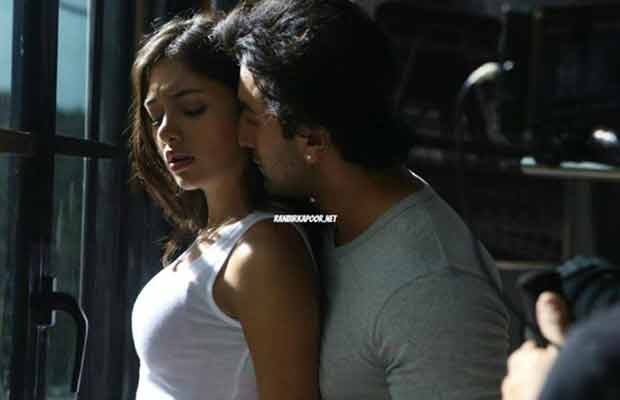 Bollywood actor Ranbir Kapoor is quite in the news since a very long time. Be it on a professional or personal level, the dapper is grabbing all the limelight. The actor has once again hit the headlines over his hot intimate pictures with a model.

Yes, Ranbir Kapoor’s intimate pictures with a model have gone viral on social media. The actor is seen getting naughty with a mystery girl and this seems to be a part of a commercial advt. However, there is no revelation on the same. These pictures are literally too hot to handle and surely many female fans will be left heartbroken. The pictures see Ranbir Kapoor romancing the model on the bed, in the balcony and everywhere.

Meanwhile, rumours about Ranbir Kapoor’s marriage has already left his female fan followers heartbroken. It was being said that Ranbir recently went to London with mom Neetu Singh to be a girl for his marriage. Soon after the news of Ranbir settling for arranged marriage went viral, uncle Randhir Kapoor refuted the rumours saying that his nephew is doing well in his career and should not spoil it by getting married at this early age.

Talking about his upcoming films, Ranbir Kapoor will be seen in Jagga Jasoos opposite ex-girlfriend Katrina Kaif. The film, which is directed by Anurag Basu, will be released on July 14. On the other hand, Ranbir is working hard on Sanjay Dutt biopic, which is being directed by Rajkumar Hirani.