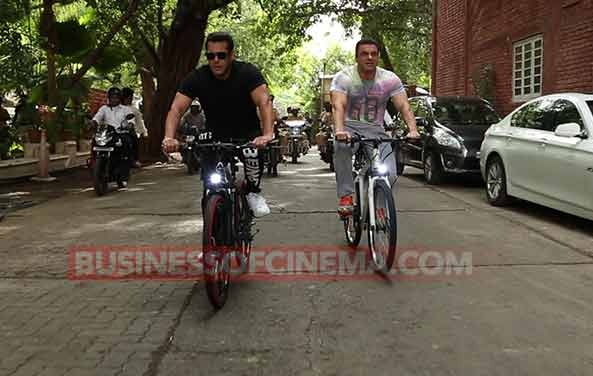 The Bollywood actor Salman Khan, with his brand Being Human, has been contributing his bit to the society. And now on June 5, which is celebrated as the World Environment Day, he has lauched E-cycles.

Salman, along with his younger brother Sohail Khan arrived on those special cycles at the launch of the product. Check out the pictures here…

There will be two types of cycles available in the electric category – BH27 and BH12. Both of these variants will be available in four colours — white, yellow, red and black. The brand is planning for other variants as well, which will be made available for sale in a few months.

Talking about the new product, Salman had told media, “People often drop the idea of using cycles when they have to travel long distances because of the effort involved. With the pedal assist and rechargeable motor support Being Human E-Cycles make it easy and practical to cycle across both urban and not-so-urban areas.”

According to the reports of moneycontrol.com, the e-cycles will be having a speed limit of 25 km/hr. Also, the price range of the product will vary between Rs 25,000 to Rs 45,000, depending upon the power of the battery.

Sharing the news of his newly launched product, the actor has tweeted saying, “Check it out – #BeingHumanEcycle is here ! @beingecycle.”

On the work front, Salman is currently busy in promoting his upcoming release Tubelight. The Kabir Khan directorial is slated to release on June 23, in the festive season of Eid, this year. Salman is also working with Katrina Kaif in Ali Abbas Zafar’s Tiger Zinda Hai, which will be hitting the screens in December, this year.