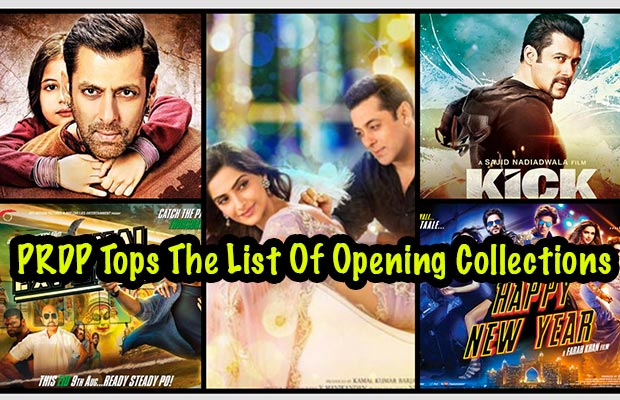 Bang Bang: Hrithik Roshan and Katrina Kaif starrer film Bang Bang had a surprisingly well run at the box office, and ranks 10th in the list of top 10 opening days of all time. The film collected Rs. 24 crores net approx with 3250 screenings across the country.

Kick: Another Salman Khan film that makes the list is Kick which also collected Rs. 25 crores crores net approx on its opening day at the box office. Kick was screened across 3800 screens which was lesser than other Salman films like Bajrangi Bhaijaan and Prem Ratan Dhan Payo.

PK: Aamir Khan starrer PK shattered all kinds of records on a worldwide basis by the time the film ended its run at the box office. Being screened across 3600 screens in India, PK collected Rs. 25 crores net approx on its day one.

Bajrangi Bhaijaan: Another Salman Khan film that released this year and created a huge buzz was Bajrangi Bhaijaan which collected Rs. 27 crores net approx on its day one. Having only 100 screens less than Prem Ratan Dhan Payo, the 4100 screenings of the film could not help it match up to the opening day collections of PRDP.

Chennai Express: Despite relatively more number of screenings, Shah Rukh Khan starrer Chennai Express is below in the list with opening day collections of Rs. 30 crores net approx. The film had 3600 screens which is much higher than Salman Khan’s Ek Tha Tiger.

Ek Tha Tiger: Salman Khan starrer Ek Tha Tiger was probably one of his films that received the best reaction from audiences. The film went on to rake in Rs. 30 crores net approx on its day one at the box office with 3200 screenings across India.

Singham Returns: Ajay Devgn’s Singham Returns was only a little far behind Dhoom 3 with an opening day collection of Rs. 31 crores net approx. The film had a total number of 3500 screens across India.

Dhoom 3: Aamir Khan starrer Dhoom 3 did not enjoy the holiday factor but still managed to collect Rs. 32 crores net approx in its opening day at the box office. The film had 3650 number of screens across India.

Prem Ratan Dhan Payo: Salman Khan and Sonam Kapoor starrer film has topped the list with collection of Rs. 39 crores net approx in its day one at the box office. The film is being screened across 4200 screens in India which is the biggest number in this list. Also the Diwali holiday factor is contributing to the collections majorly.