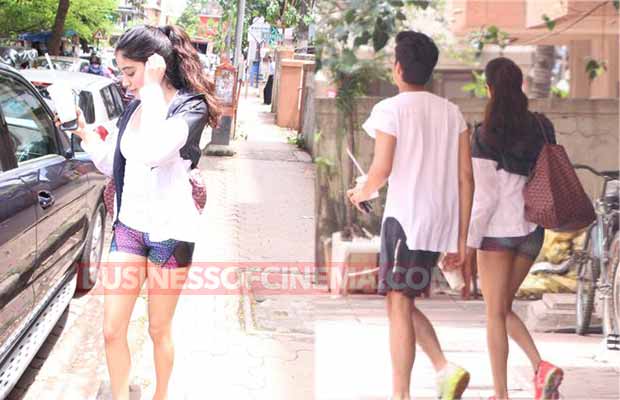 Jhanvi Kapoor has been spotted with a mystery guy as she was coming out of the gym.

The star kid Jhanvi Kapoor has been in news for a very long time. Now and then, there have been reports of the girl making her debut in the Bollywood film industry with some or the other actor.

If the reports are to be believed then she is very soon to make her Bollywood debut with the official remake of ‘Sairat’ or with the sequel of ‘Student Of The Year’. And the actress needs to be in her best shape for that. Maybe that is the reason why she has been hitting the gym.

Jhanvi was spotted coming out of the gym and as usual the young lady was looking stylish. She was seen wearing a white tee with multi-colored shorts and had also put on a black and white jacket.

But what was interesting to notice was the mystery guy who came out alongside her. We wonder who the guy is!

Earlier talking about Jhanvi’s career and her marriage, her mom Sridevi had said, “She wanted to do the film (Student Of The Year 2) and initially, I wasn’t in favor. I don’t think it’s a bad industry. I am a creation of this world. But as a parent, it would give me greater joy to see her married. But her happiness matters more, and if she does well as an actress, I will be a proud mother.”