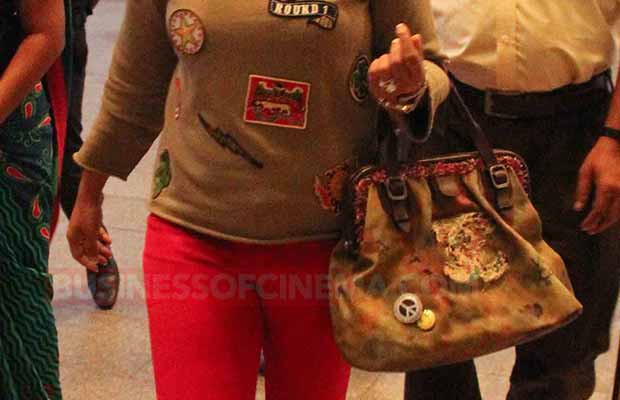 Rani Mukerji, who just completed the shoot for her comeback film Hichki directed by Siddharth P Malhotra was spotted at the airport with her daughter Adira. The actress, who was away from the public glare for a long time, is seen making frequent airport appearances. Last night, the actress was snapped wearing a grey sweatshirt and red loose pants that she teamed it up with wedged heels.

Well, we know Rani is too busy with her mommy duties and is also seen working on her comeback film. But, the actress should also start taking time for herself and her public appearances. Rani Mukerji has impressed us time and again with her intense roles but not with her style statements.

As talented an actress as Rani is, her fashion history is irregular with hits and major misses and the recent one is her airport appearance in red pants and grey top. We think if Rani had to go with something casual; she could have decided on something better. Or even a floral maxi dress would have been the best option. Looks like she is unable to come out of her 90s fashion. She should have left those pants in the 90s.

Well, now that Rani is making her comeback in the industry, we hope she gives her fans a treat with amazing style statements and more glamorous appearances.

A few months back, Rani Mukerji has written an endearing note about Adira through Yash Raj’s Twitter handle, in which she had spoken about all the joys that Adira has given her. She had said, ”I have become much calmer, more patient and more forgiving. It happened overnight one day suddenly I realized I have changed.. again for the better I guess. I hope I can bring Adira up beautifully. Without any fears. Brave.. Wise.. Clever.. Disciplined.. Well Mannered. I want everyone to be proud of her.. Even if nobody is.. I will always be proud of her.”