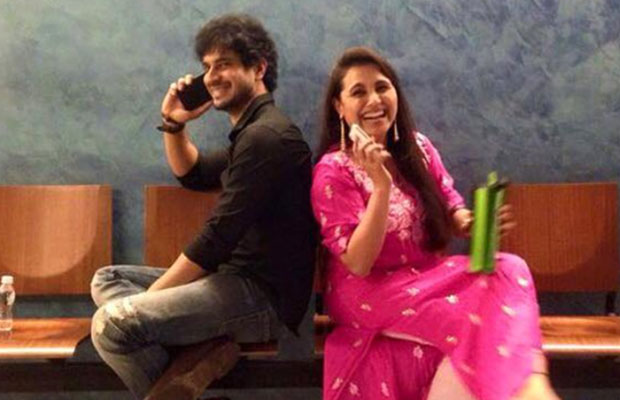 [tps_footer]The film Mardaani starring Rani Mukherjee and Tahir Raj Bhasin completes two years today. The action thriller gave out an important message on the human trafficking and conditions of girls in India. The film is quite impactful and gives out a bitter message of how girls are unsafe in Ithe country.

In the film, Rani plays a badass cop Shivani Shivaji Roy who is on a mission to track the master Karan Rastogi, who does child trafficking and drugs. She faces a lot of problems and had to fight for herself and other girls. The film shows the ugly truth of how girls are forced into prostitution. Girls from all the ages are forced into this flesh trade. The film has a strong tagline, ‘Jis Duniya mein maa-behne rishte nahi gaali hain, uss duniya se maryada ke rishte saare todungi,’ screams an eye-catching tagline of Mardaani’s poster.’

Directed by Pradeep Sarkar, the film is quite compelling and striking. today, as it completed two years of its release, Tahir has shared a cute picture with Rani on his Facebook. They both are holding mobile phones in their hands and can not stop laughing for a reason. He captioned the pic, ‘The Mardaani throwback ? Yash Raj Films – YRF ‪#‎PradeepSarkar‬ ‪#‎RaniMukherjee‬ ‪#‎2YearsOfMardaani‬.’

Well, Mardaani is truly and eye-opening and inspiring film for all the girls to fight back against the evil. Tahir and Rani even won awards for their performance in the film.[/tps_footer]