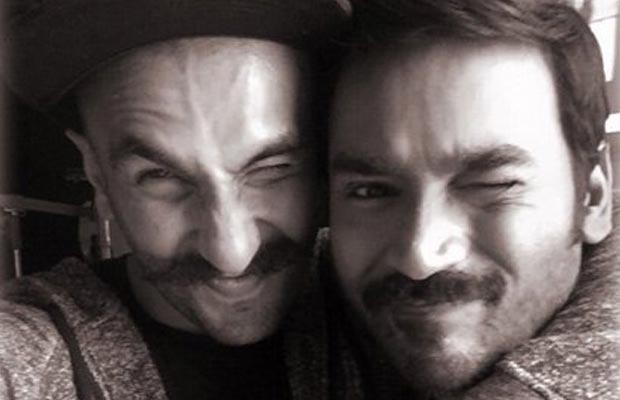 [tps_footer]Bollywood heartthrob Ranveer Singh and South star Dhanush recently shared a warm moment on Twitter back and forth. As we all know Ranveer’s upcoming movie ‘Bajirao Mastani’ is all set to release in Tamil and Telugu as well which has gotten all South stars all the more excited to catch the film. ‘Raanjhanaa’ star Dhanush took to his Twitter handle and expressed his amazement after watching the film’s trailer, and also revealed how impressed he was by Ranveer Singh.

Dhanush wrote, “Stunned by #BajiraoMastani trailer. Phenomenal. @RanveerOfficial at his best 🙂 can’t wait for the film” To which Ranveer replied sharing an adorable photo of the duo which was probably clicked long ago. He wrote back, “@dhanushkraja thank u my good brother! U r always so kind & so warm! Crushing Hug & Loads of love #Superstar #Bro” Dhanush was also quick to reply back by writing, “@RanveerOfficial more power to you bro :)”. 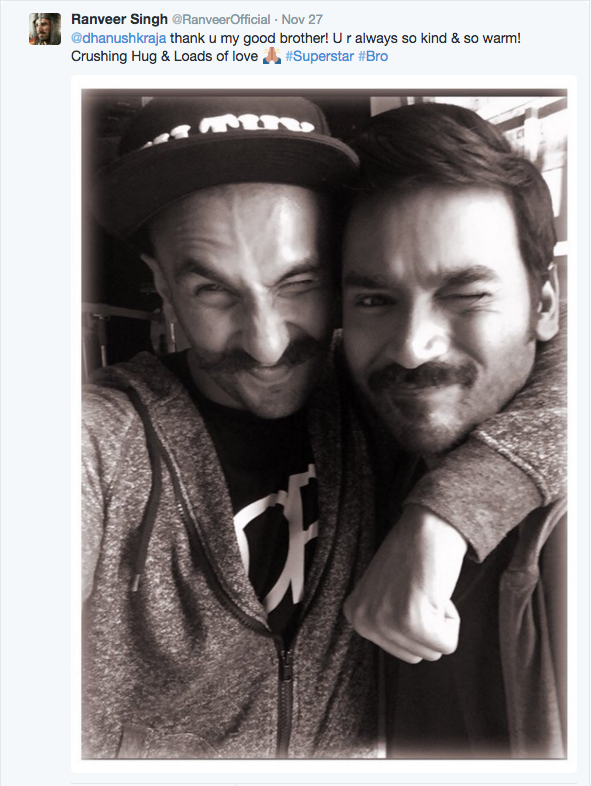 Well we are absolutely loving this bromance between two of the most sensational actors in India. While Dhanush is on cloud nine with back to back releases, Ranveer Singh is all set to dazzle the audiences with his grand avatar as Maratha warrior Peshwa Bajirao. ‘Bajirao Mastani’ starring Deepika Padukone as Mastani, and Priyanka Chopra as Kashibai is all set to release on December 18, 2015 clashing with SRK‘s ‘Dilwale‘.

It looks like stars may have started taking sides between ‘Bajirao Mastani’ and ‘Dilwale‘, and with Dhanush‘s wishes for Ranveer, should we assume that the actor is all the more excited for his film than anyone else’s? Well whatever it is, we think a movie with Ranveer and Dhanush would be kick*ss, don’t you think? Dhanush wil next be seen romancing Samantha Prabhu in the film ‘Thanga Magan’ also starring Amy Jackson. While Ranveer Singh has signed ‘Befikre’ with YRF starring Vani Kapoor.[/tps_footer]