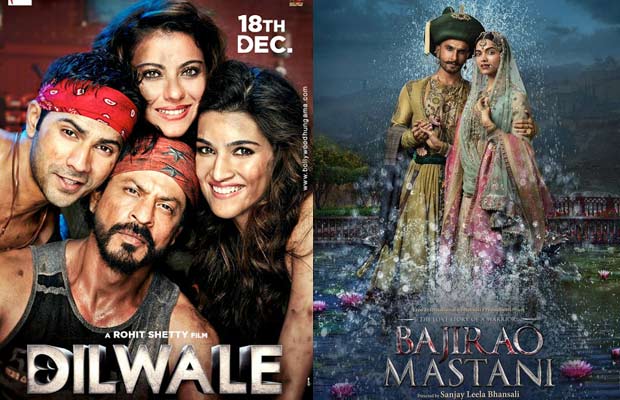 [tps_footer]As we all know two biggest Bollywood films, Shah Rukh Khan starrer ‘Dilwale’ and ‘Bajirao Mastani‘ is all set to clash at the box office. Both the films have started planning rigorous promotions with only few weeks left for its release on December 18, 2015. And now it seems like SRK’s film is currently ahead in the race as it is becoming the choice of distributors due to its commercial value. Due to its commercial value, ‘Dilwale’ has managed to bag more screens that ‘Bajirao Mastani’ as of now.

However experts are saying that acquiring screens is an ongoing process and nothing can be said before one week of the film’s release. So till then it won’t be fair to make any comparisons, nonetheless, as of now ‘Dilwale’ is leading in terms of number of screens. According to Mid-day sources, ‘Dilwale’ has bagged more than 2500 screens while ‘Bajirao Mastani’ screens vary between 1800-2000 screens at the moment. Things can change any time as both the films have different marketing strategies.

Well the competition is surely on and as the release date is approaching, both the film’s cast and crew are feeling the heat! Already all the stars, Shah Rukh Khan, Kajol, Varun Dhawan and Kriti Sanon from ‘Dilwale’ and Ranveer Singh, Deepika Padukone and Priyanka Chopra from ‘Bajirao Mastani’ have commented on the clash between the films. All of them believe it is going to be a friendly competition and that both the films have market enough to do well.

Directors Sanjay Leela Bhansali and Rohit Shetty have yet not commented about the films’ clash, which reveals how nervous they might be. However in terms of fan following, both the films are making a buzz equally with SRK fans rooting for ‘Dilwale’, and others rooting for ‘Bajirao Mastani’ for its grandeur and fresh content. Well only time will tell who will rule the box office from December 18 onwards![/tps_footer]