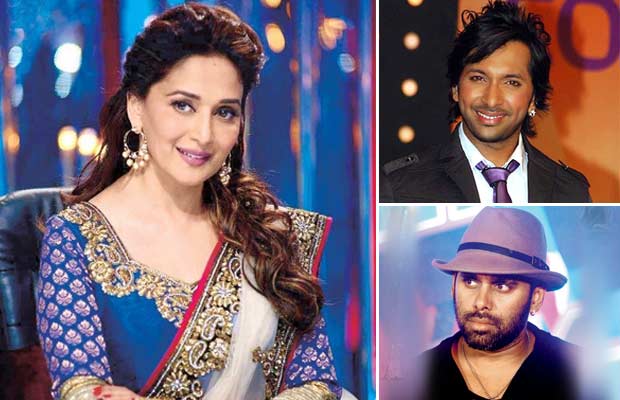 [tps_footer]Madhuri Dixit Nene has ruled the silver screen and has charmed everyone with her acting skills, screen presence, beautiful smile and killer dance moves. Isn’t she undeniably talented and beautiful ??? And, even after so many years, Madhuri is still maintaining her charm, just like a diamond shines even after multiple years.

We will soon get to see Madhuri Dixit Nene in the Indian version of So You Think You Can Dance ? And, along with Madhuri, Terence Lewis and Bosco Martis will also judge the show. So, we need to be ready to watch out some spectacular performances on this new platform and give a big opportunity to new artists to make it big in the entertainment world.

It was always a treat to watch Madhuri Dixit Nene in Jhalak Dikhla Jaa and the way she would judge would be fair enough and so sweetly. And, we have seen Terence Lewis different hair styles and dance styles too. It’s going to be for the first time that ace choreographer Bosco will judge a show. All the three judges are extremely  talented and are specialized in different dance forms. Terence Lewis is an Indian dancer and choreographer, specializing in contemporary dance. Terence has judged a reality dance series, Dance India Dance season 1, 2, 3 and he successfully runs his ‘Terence Lewis Contemporary Dance Company’ in Mumbai, holds dance workshops both in India and abroad. He has choreographed for various bollywood films like, Lagaan, Jhankaar Beats and Naach and he also choreographed, Disney India’s first theatre production Beauty and the Beast. He was also a judge of Nach Baliye 5, along with actress Shilpa Shetty and film director Sajid Khan. And later, he judged, Nach Baliye Shriman v/s Shrimati along with actress Shilpa Shetty again and film director and choreographer Farah Khan.  Terence has received Star Parivaar Award for Favourite Judge.

Our next judge, Madhuri Dixit Nene is a trained Katthak dancer and the most favorite student of ace choreographer Saroj Khan. Madhuri’s acting skills and dance has always received a lot of praises even from critics and She was awarded the Padma Shri, India’s fourth-highest civilian award, by the Government of India, for her outstanding contribution in the world of entertainment. She has also started with her online dance academy, Dance With Madhuri to spread the joy of dance and help her fans and viewers to dance like her.

And our last judge, Bosco Martis, is the ace choreographer, remember the hit choreographer duo Bosco-Ceaser, who have given us crazy dance moves in movies like Bunty Aur Babli, Mission Kashmir, Zindagi Na Milegi Dobara, Phata Poster Nikhla Hero, Bang Bang and many more. They are Bosco Martis and Caesar Gonsalves, who have together worked on 200 songs and about 75 films. Other than choreographing songs for movies they also run the Bosco Caesar Dance Company and now, Bosco is ready to judge this new dance show.