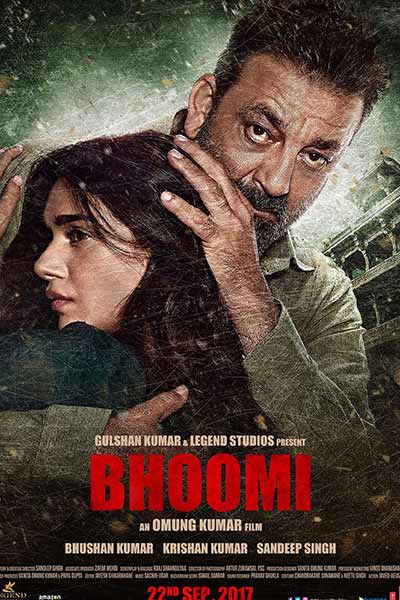 After creating a huge buzz with an intense Sanjay Dutt staring at audiences out of a ‘Bhoomi’ poster, the second poster of the most awaited film of the year which was released by T-Series and Legend Studios and it is one that will tug your heartstrings with a poignant Sanjay holding Aditi in a protective hug.

Director Omung Kumar says, Sanjay and Aditi complement each other in their roles as father and daughter and that bond is quite evident from the poster.”

Producer Bhushan Kumar adds, “Bhoomi is a story about a father daughter relationship and this poster speaks volumes about the film and their relationship. Sanjay Dutt and Aditi have portrayed their characters so well which is evident in this poster look as well.”

Producer Sandeep Singh feels the casting could not have been better. He adds, “I dont think there could’ve been anybody better than Sanjay Dutt & Aditi Rao Hydari to play these roles. This image in the poster is Bhoomi the film.”

‘Bhoomi’ is an emotional and sensitive revenge drama that explores the relationship between a father and daughter.