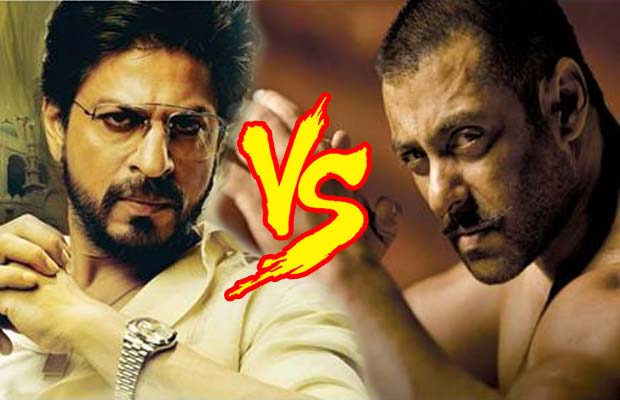 [tps_footer]The hot topic of Salman Khan‘s film ‘Sultan’ and Shah Rukh Khan‘s film ‘Raees’ clash is nowhere stopping to catch the fire in Bollywood. The two have always bonded like best buddies but their big fight on the silver screen continues even today. With Eid, likely to see a clash between Salman and SRK films, Shah Rukh Khan feels that it would be logical to shift the release dates.

“I think logic will be to shift (release dates of both ‘Raees’ and ‘Sultan’). We will try and figure out a way so that it doesn’t eat into each other’s business. It is awkward… it’s like what are we doing. I don’t think we like to have it (box office clash),” Shah Rukh told reporters.

Shah Rukh Khan who is currently engrossed with the promotions of his upcoming film ‘Fan’, said he will talk to his friend Aditya Chopra, who is the producer of ‘Sultan’, and also with Salman Khan regarding the clash of both the films. “Adi (Aditya Chopra) is my family and so is Farhan Akhtar (producer of Shah Rukh’s Raees). With all due respect I will speak to Adi, Salman (about avoiding the clash). I have spoken to Farhan already. If we have to change, one of us will move on,” Shah Rukh said.

“If they are adamant or fixated that somehow due to some sense of righteousness Eid belongs to Salman Khan so be it. Personally Farhan, Adi and I are friends and I don’t think we have ego issues. We all know if there is an opening number assumed in terms of business we will share it 50-50 or whichever ratio. I am not saying X is a bigger star or Y,” Shah Rukh Khan added.

Well, this is not for the first time that both the stars have scheduled their releasing dates of their respective film on the same date. Earlier, SRK’s ‘Don’ and Salman’s ‘Jaaneman; clashed together in Diwali 2006. According to SRK’s statement, it seems one of the two would back out and change its release date.[/tps_footer]