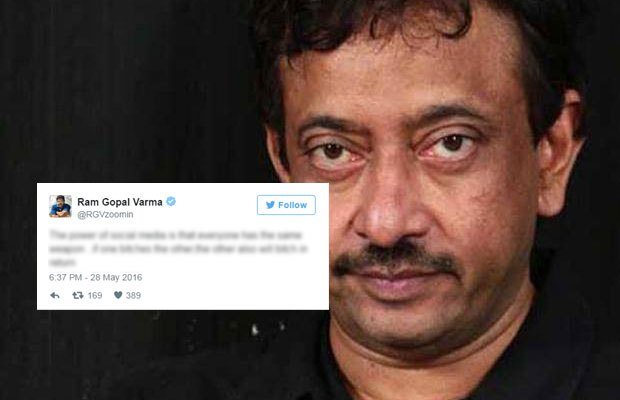 [tps_footer]Is there no freedom of speech? Or is it only for the special few people on this planet? We respect Ram Gopal Varma as a terrific filmmaker but he needs to keep his cool and know the meaning of patience and the responsibility of a public figure. Even if you do a good work it’s not necessary that everyone will love your work, you, and your efforts. There will be exceptions,there will be some people who will not like whatever you are doing. And, we wonder why RGV can’t take criticism when he is openly ready to criticize just anybody on social media.

Recently, Ram Gopal Varma‘s Veerappan has garnered good reviews and responses from the people but, very few people have criticized his latest movie and a female journalist was one of those folks who didn’t like Veerappan and she gave a negative review. Instead of taking it in a sporting spirit, RGV lashed out at the journalist and insulted her. Our dear Ramu went ahead and deleted his negative and insulting tweets which he had sent for the journo.

The power of social media is that everyone has the same weapon ..if one bitches the other,the other also will bitch in return

Now, Ram Gopal Varma is here with some clarifications but honestly, this sort of behavior shows RGV’s patience, understanding level. When he criticizes and insults people that’s alright, he is just being straight forward and honest but when someone else gives the send return gift to Ram Gopal Varma then he will insult you for your own opinions. RGV you can’t force people to like your movies and only speak well about it.