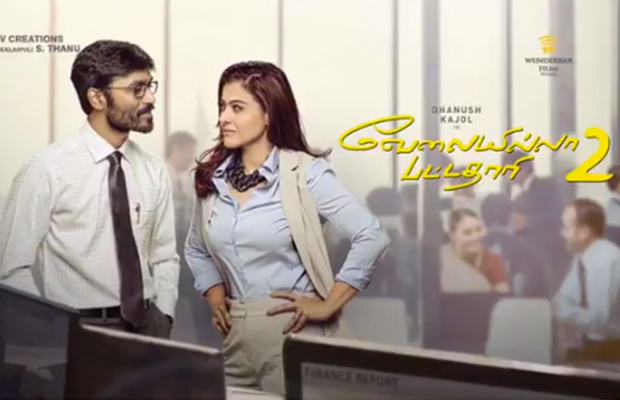 The ring of the New Year’s came with good news for all Kajol fans. The first look of her upcoming Tamil flick Velaiyilla Pattathari 2 opposite Dhanush was released by the makers of the film. It showed the Raanjhanaa actor as a construction engineer watching out for Kajol.

After that today the South superstar Dhanush, shared the second video teaser from the film. He captioned it saying, “#Vip2 first day shoot in year 2017 #raghuvaranisback @soundaryaarajni @theVcreations @RSeanRoldan”.

This one again sees the two lead at cross with each other, giving cold shoulder, in a work place set-up.

Check out the motion teaser here.

Interesting motion teaser created by the makers of the film, don’t you think?

This film is helmed by Soundarya Rajinikanth, Rajinikanth’s daughter as well as Dhanush’s sister-in-law. She also directed another Bollywood actress, Deepika Padukone in Kochadaiiyaan opposite Rajinikanth.

Finally, the shoot of the film has begun and Raghuvaran will return with a new story, and this time Kajol will be challenging him who plays the lead antagonist in this film. The cast that will be a part of the sequel as well are Amala Paul, Hrishikesh, Samuthirakani and Saranya.

The first installment of the film in 2014 turned out to be a hit movie that starred Dhanush in the lead role. It was the story of Raghuvaran who was unemployed for four years and what happens once he found a job.

VIP 2 seems to be on the similar lines in work environment. The movie is slated to release some time in 2017!