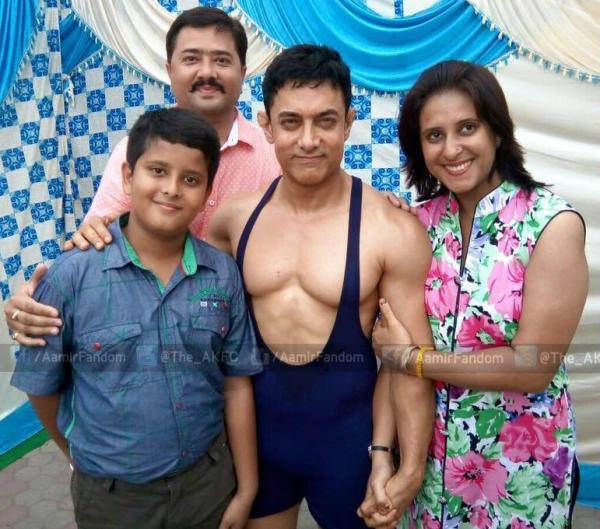 [tps_footer]Aamir Khan is known for experimenting with his looks and we must say Aamir never fails to surprise us with is new looks and dapper avatar. As we all know, Aamir Khan is gearing up for his upcoming film Dangal and we must say the actor has worked really hard for the film. First, he had to gain weight for some portion of the film and then he had to shed all the weight which he had gained.

It’s been months now since Aamir Khan has been busy shooting for his film Dangal, where he plays wrestler Mahavir Phogat, who trained both his daughters to become wrestlers. We had shown you the pictures of both his looks and we must Aamir Khan is looking quite impressive in this avatar.

But unlike Salman Khan, Aamir is not wearing a langot, instead, he is wearing a professional wrestling costume. Aamir Khan definitely knows how to do everything in a systematic manner. There are some pictures of him wearing a wrestling gear and we must say Aamir Khan is looking fit and handsome in that costume. Dangal is surely going to be a blockbuster hit and we hope that Aamir Khan shines out in the film.

Meanwhile do check out the pictures of Aamir Khan in the wrestling gear and tell us about it in the comments below.[/tps_footer]