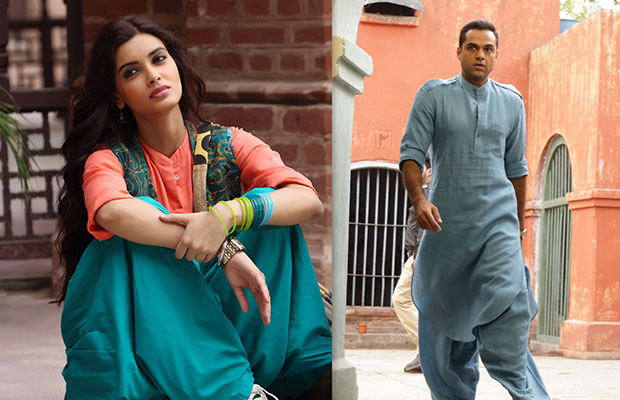 Abhay Deol in a pathani suit and Diana Penty pondering over something in an ethnic attire with sneakers on, that’s the first visual impression of a new film titled ‘Happy Bhaag Jayegi’.

Producers Aanand L. Rai and Krishika Lulla join forces yet again for this cross-border romantic comedy, written and directed by Mudassar Aziz. Happy Bhaag Jayegi keeps Aanand L. Rai’s trend of unusual pairing even as a producer and will see the exciting pairing of Abhay Deol, known for his character driven roles and Diana Penty, who made her big Bollywood debut with Eros’ Cocktail. The upcoming comic ensemble also stars Ali Fazal, Jimmy Shergill, Piyush Mishra, Kanwaljit Singh and Momal Sheikh. The film is currently on floor in Amritsar.

Producer- Director Aanand L. Rai added, “I believe the audience always likes to see something unusual and different on screen. Other than the story, perhaps the one thing that catches everyone’s attention is the actors featuring in the project. Both Abhay and Diana are talented actors and they are apt for the roles that they will be playing in Happy Bhaag Jayegi”.

A true comic tale of errors, the film revolves around a young runaway bride who crosses over the border to land up in Pakistan and the following eventful series of crazy episodes.