Aishwarya Rai Bachchan is looking magnificent in the just-released trailer of her upcoming film ‘Ae Dil Hai Mushkil’. The much in limelight movie also stars Anushka Sharma and Ranbir Kapoor in lead roles but all the eyes are stuck on Aishwarya. The senior actress who is away from the silver screen since a while will now flaunt her charisma yet again in ADHM.

The audience is already going gaga over Aishwarya Rai’s look in the film. The beautiful starlet will be seen in the role of a poet in the movie. Well, not only the fans but also starlet Preity Zinta is all impressed by the Bachchan bahu.

Preity Zinta who is active on her social media accounts took to the microblogging site Twitter and said, “Hey @juniorbachchan Happy Ganesh Chaturthi? I’m watching the #Aedilhaimushkil promo in a loop & I think I have a girl crush on Ash #bachaao.” 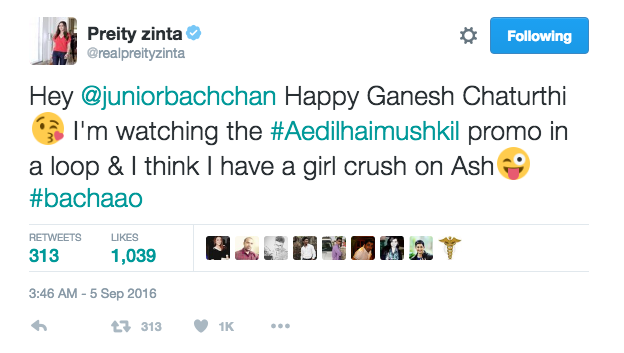