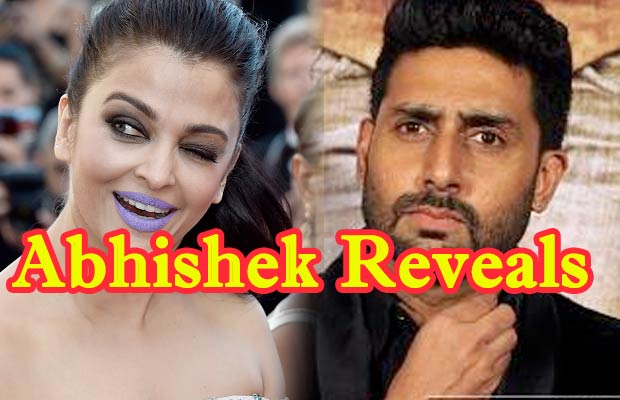 [tps_footer]We all know that Abhishek Bachchan is mighty smitten with his wife Aishwarya Rai Bachchan. Well, he is not only seen gushing over her in interviews, but he is also known to be extremely supportive of his wife. Aishwarya who recently made news headlines for her fashion choices at the 2016 Cannes International Film Festival, is waiting for her film ‘Sarabjit’ to release. The popular diva and fashion icon will be seen in a de-glam avatar in the film and the trailers have already started a lot of buzz and curiosity among audiences.

When asked about his opinion on his wife’s recent performance, AB Jr. said, “To start with you have to understand that she is an actor who started her career with a de-glamorous film like ‘Iruvar’. She has always done that and has gone after roles. She has never sought that she should do always glamorous roles. That is an adage which is tagged on to her. When she decided to do ‘Jazbaa’, it was a very brave choice for her to choose that movie as her comeback film. ‘Sarbjit’ was a no-brainer and any actor would give their arm and leg to that film. It is a wonderful film. It’s a powerful role and she has worked very very hard. She was brilliant in the trailer.”

“I am excited for Sarbjit. We were dubbing together in the same studio – she was dubbing for Sarbjit and I was there for Housefull 3. So she called me and showed me few scenes. It is very powerful stuff. It is an intense film and Aishwarya has worked really hard on it. And I really hope for her and team’s sake the movie does well. They have really gone for it and given it their best,” he added when he was prodded further.

Well, when he was asked if his wife behaved at home like she did in the trailer, Abhishek chuckled and added,” No, no. Aishwarya is not like this at home. She is a very loving and caring person at home. She never raises her voice. I mean you need to do something really exceptional for her to be upset. She is calm and cool.”

Well, lucky for this man that he has a patient and loving wife. The fact that she is considered to be one of the world’s most beautiful women doesn’t hurt either.[/tps_footer]