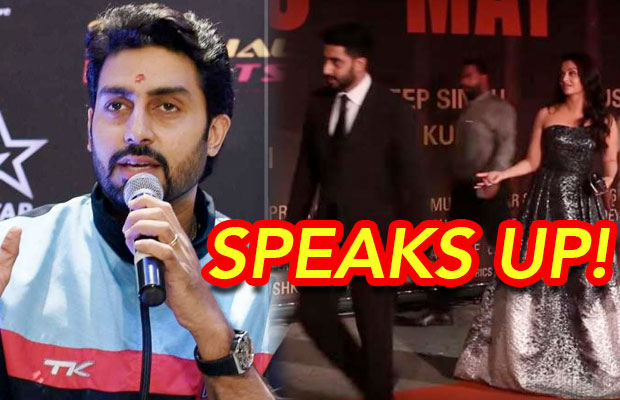 [tps_footer]Bollywood’s adorable couple Aishwarya Rai Bachchan and Abhishek Bachchan are giving us major relationship goals with their strong marriage since 10 years now. But recently, during Sarbjit screening, Abhishek left Aishwarya alone at the red carpet while the actress was still talking to him. This made many to think that there are sorts of issues between Abhi-Aish. Speculations started doing rounds about Aishwarya and Abhishek’s tiff.

“We Bachchan’s don’t fight in public. I walked away from her side so that the media could interact with her uninterrupted. After all, it was her evening and her moment of glory. I was there just to support her,” he added.

Abhishek Bachchan couldn’t stop praising his wife Aishwarya Rai Bachchan and her performance in recently released film Sarbjit. Abhishek said, “When I saw the film I was so moved, I couldn’t move. The sheer audacity of attempting a film on a subject so complex and layered left me overwhelmed.I was bowled over by the film and by Aishwarya’s performance.”

Well, it seems people are actually jealous of the adorable couple and hats off to Abhishek Bachchan for the way he made a strong comeback over the rumours of his tiff with wife Aishwarya Rai Bachchan. We don’t think that there can be any trouble in lovely couple’s paradise ever.